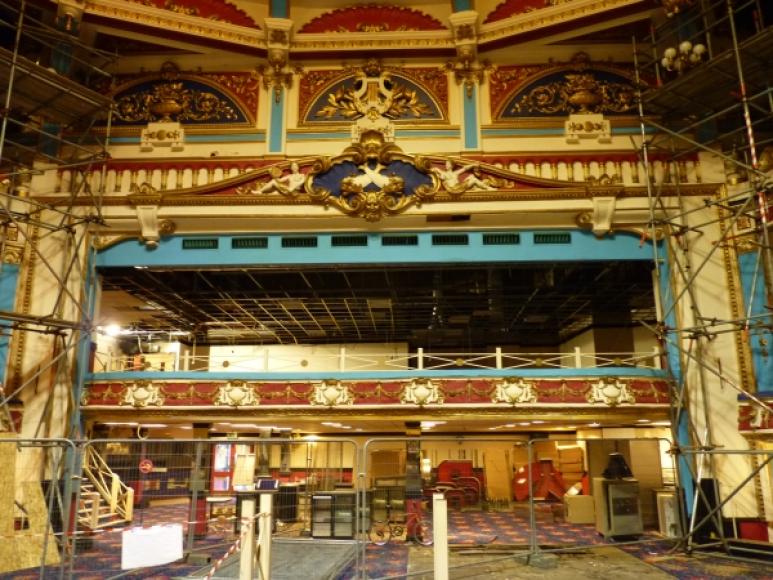 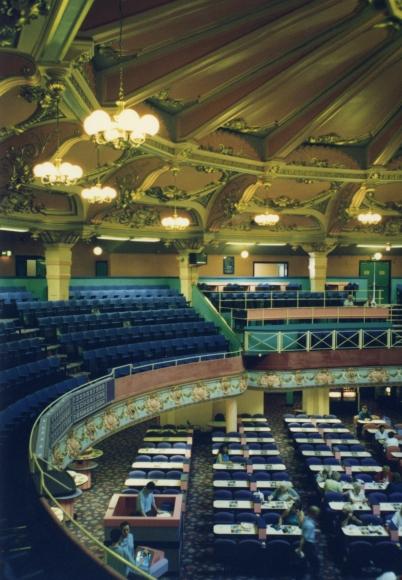 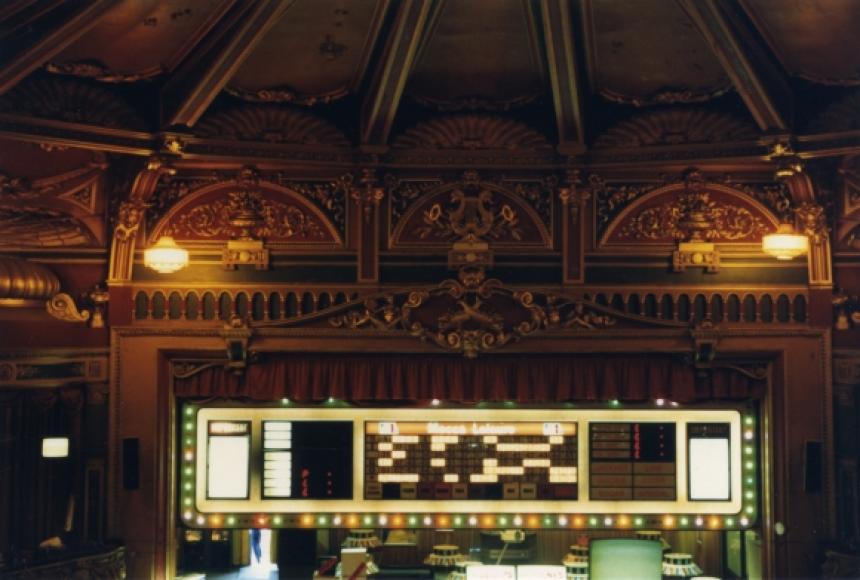 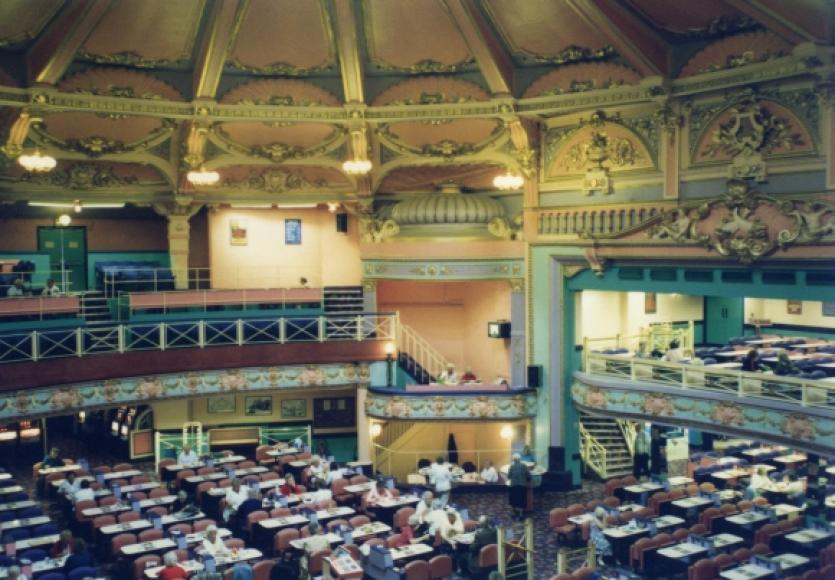 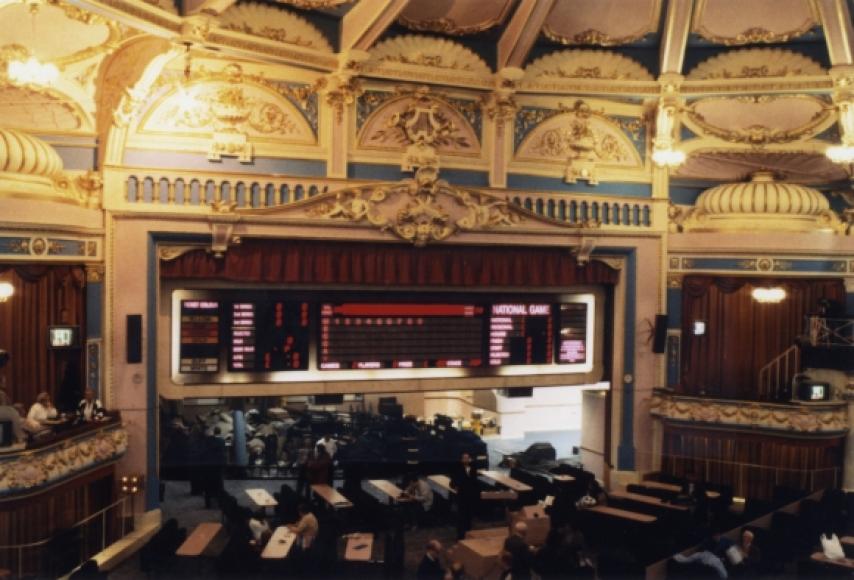 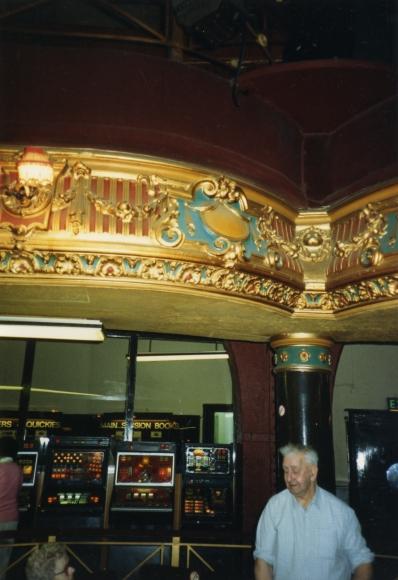 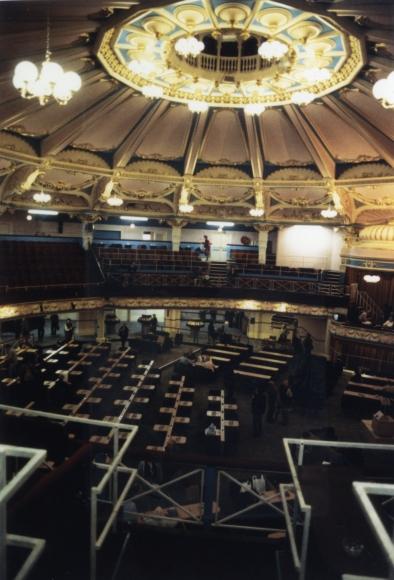 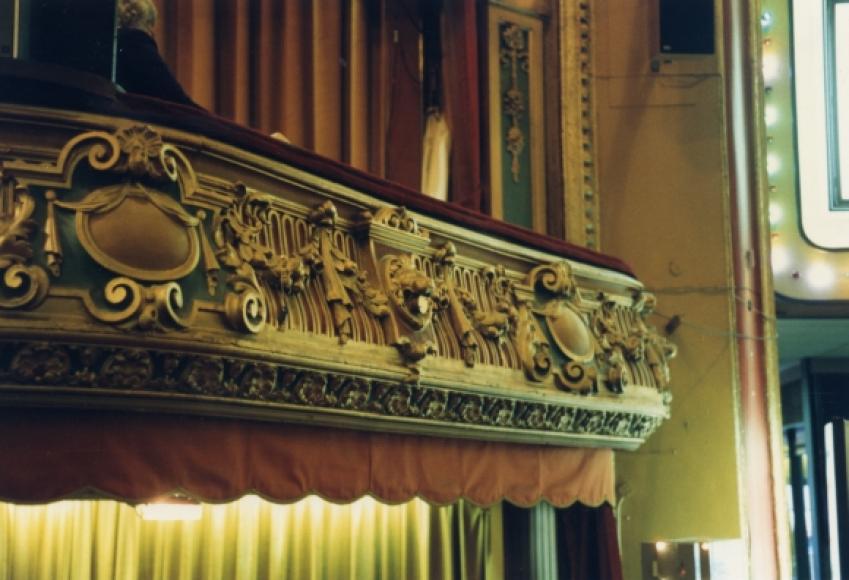 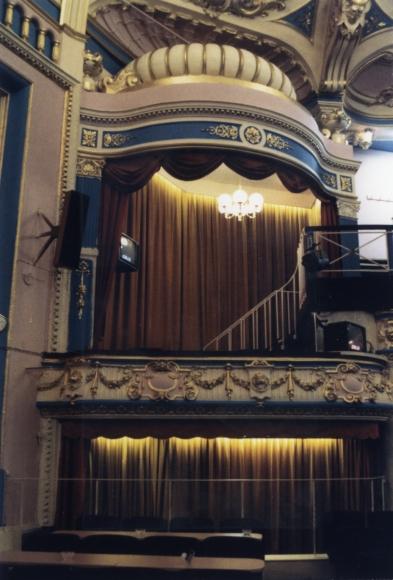 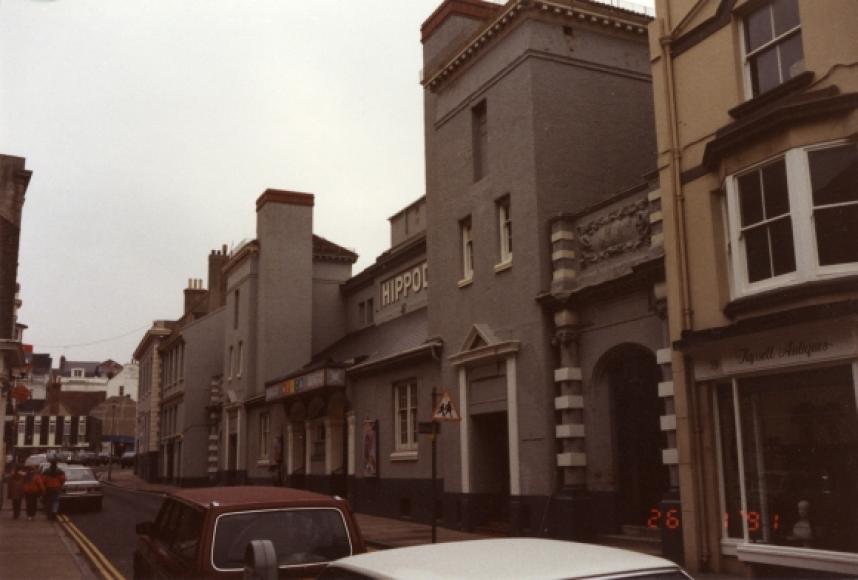 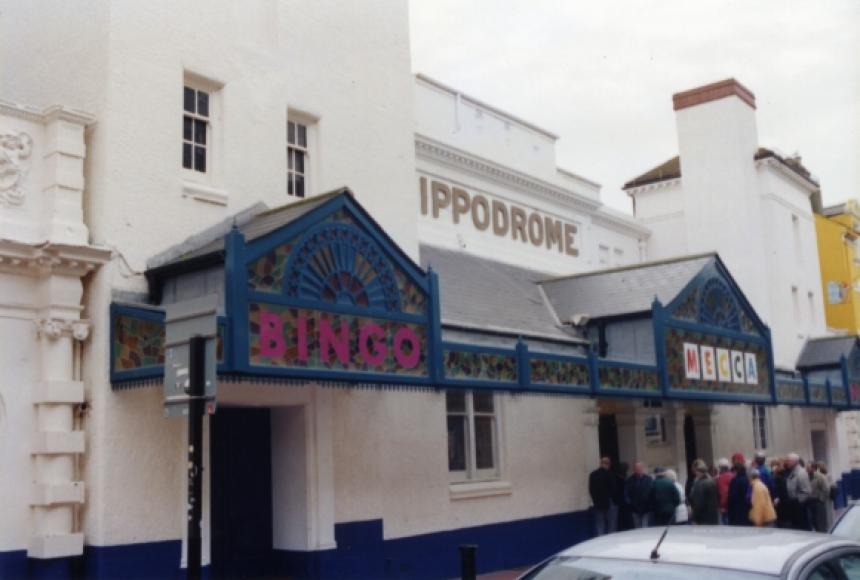 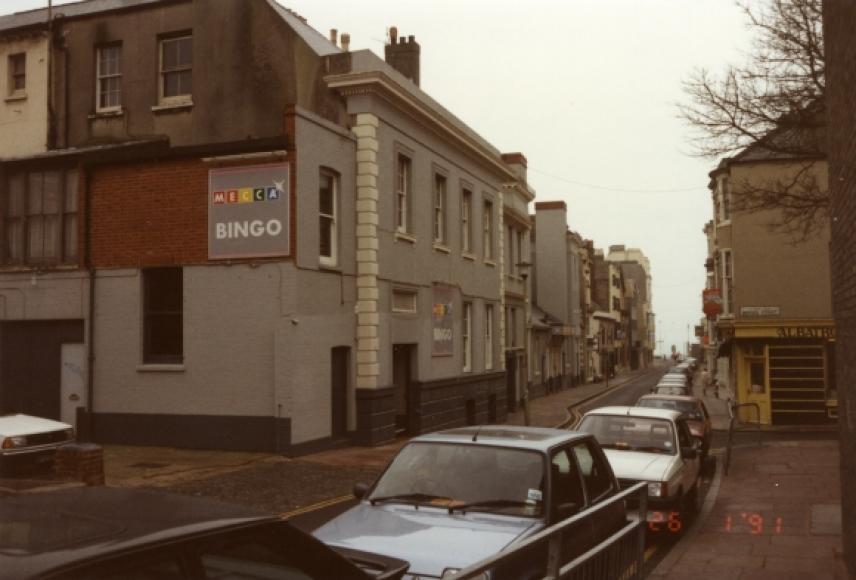 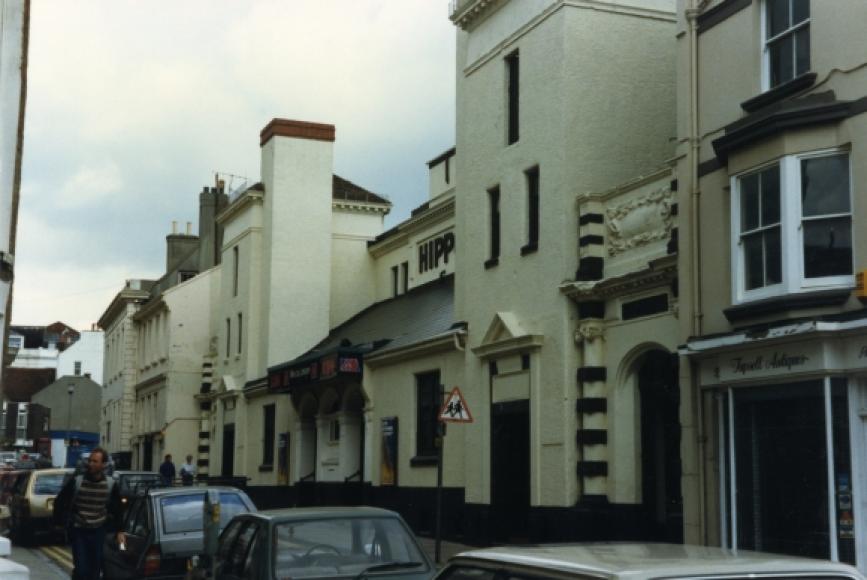 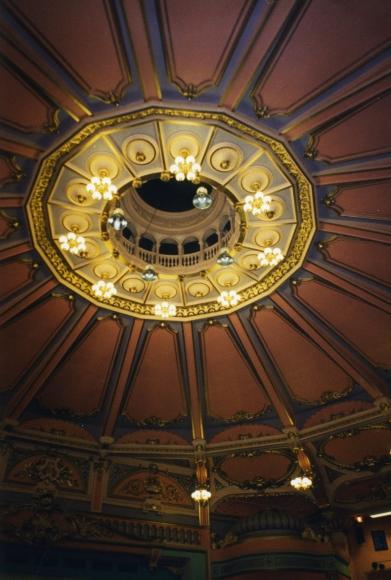 A magical conversion by Frank Matcham of an 1897 ice rink into the Hippodrome theatre in 1901. Long, low and restrained symmetrical Italianate stuccoed frontage to Middle Street. The central entrance is flanked by square Italianate pavilions with tiled roofs and projecting modillion cornice. The two ventilation towers originally had a steep pitched roof and a stepped parapet. The pavilions also had projecting timber balconettes. Across the frontage featured a stained glass cast iron canopy, replaced in 1980 with diluted replica. Above, a lean-to slate roof with a central panel lettered 'HIPPODROME'. The central three arched entrance with opalescent decorative ceramic panels featuring seahorses. The pavilions have pediment entrances, framed by blocked Ionic engaged columns with pulvinated frieze and modillion cornice.

A narrow entrance crush room with high quality mahogany panelling, coved plaster ceiling and bevelled glass entrance doors leads through to a foyer opening onto the near-circular, huge, opulently decorated auditorium. The 1901 conversion altered the building into a circus. However, the arena was soon given over to permanent seating facing the proscenium. Architecturally, historically and as a performance venue, it is a highly significant heritage asset. As well as its significance as a theatre, it is the most intact and finest example of a free standing circus (without a water feature) illustrating a tent-like form following the design of travelling circuses; and is also the only surviving statutory listed example of a building originally designed as an ice skating rink.

The most spectacular feature of the auditorium is the vast ceiling in the form of a panelled tent which covers the whole space and is richly decorated with boldly modelled Baroque plasterwork. It is an impressive volume, with plasterwork featuring female figures, sea creatures, comedy and tragedy masks, instruments, urns, cartouches, putti, festoons and lion masks. At the centre is a balustraded gallery, reminiscent of (but not the same as) the one at the London Hippodrome. There is only one balcony (with seven rows) curving with the walls to meet the single, large onion-domed boxes which flank each side of the wide, low proscenium. Balcony retains its original cast iron seating; balcony front with fruity swags and cartouches. To the rear, a row of boxes in Spanish mahogany with reeded columns and Ionic capitals supporting decorative painted arches.

The circus was served by a suite of stabling, an open yard and boiler houses situated to the north of the theatre. The long ramped equestrian entrance lead directly to the circus ring. It is only the equestrian ramp that survives. Small dressing rooms were besides the stage. Front of house there were two bars and toilets.

In 1902, the building was converted into a variety theatre by Bertie Crewe. Crewe took out the circus ring and created an orchestra pit with apron stage. A pair of boxes with onion domes were inserted within the equestrian entrances, flanking the stage. The ground floor was reseated with chairs and tip-up seats to face the stage.

In 1916 the building was updated again, this time by J. Emblin Walker. His alterations to the Brighton Hippodrome were very substantial and included the creation of a new stage, fly tower and dressing room block. Major alterations and redecoration of the auditorium were undertaken including the removal of the stage boxes. These were rebuilt at a lower level, and two new boxes were erected on each side (on top) with large Moorish domes in fibrous plaster. An entirely new plaster panel front, with heavy enrichments, covered the new proscenium wall, and two large shells worked and modelled in situ at each corner. Cast iron radiators were installed. A bioscope box was erected on the roof at the back of the circle. One room on the ground floor of Hippodrome House as converted for use Saloon bar. More bars were created at Circle level.

The original ‘Palm Court’ within the Brighton Hippodrome opened in 1919 and was a grill and restaurant. It was in the Moorish style. However, a new ‘Palm Court Lounge’ was constructed in the adjoining premises (Hippodrome House) in 1939 at a cost of £4000 to resemble an old Italian garden. It was designed to enable ticket-holders to wait in luxurious surroundings before the commencement of a show and had two cocktail bars. The original idea, by George Black, included a false Italian bridge with concealed lighting set over a green tiled fishpond and fountain. The decorative scheme, described as ‘a sunny spot on the shores of the Mediterranean’, was constructed by Cyril Drinkall (General Theatre Corporation Ltd) under the direction of Pierre Cohen. It featured a painting by Dame Laura Knight R.A. purchased by George Black. Although it has undergone some alteration, not entirely to its architectural advantage, it remains as an impressive and usual suite of rooms with sumptuous plasterwork.

Brighton Hippodrome is a unique survival and remains very much intact with only superficial alterations (the levelling of the auditorium, for example, which ‘submerges’ part of the lower boxes and the timber panelled orchestra rail). The stagehouse still retains its elephant ramp and Grand Master. Many of the main features front of house and Palm Court survive.

Furthermore, the circus conversion created a highly functional theatre with good technical operation and perfect sightlines. The circular/cylindrical auditorium and particularly the curved Balcony literally puts the actor into focus of the audience. This is because the circus auditorium is effectively a drum, and the proscenium has been formed by cutting a section out of its wall. The audience therefore sits in a distinct circular space which extends through the proscenium. This spatial link heightens the contact between actors and audience. It provides a three-dimensional quality where the actor is surrounded by faces and the audience are aware of each other. Together with the elaborate and rich plasterwork providing glamorous surroundings, there is no surprise that the building was a successful and popular variety theatre and concert venue.

The main issue is one of access to the theatre flytower and stage. The original access from the North is in private hands. Access to the flytower and the present arrangement from the east is essential if the building is to function as a theatre. For viable theatre use, the access must permit regular deliveries from articulated vehicles used for weekly touring productions, even smaller productions would require access from the east to prevent damage to the decorative plasterwork of the auditorium.