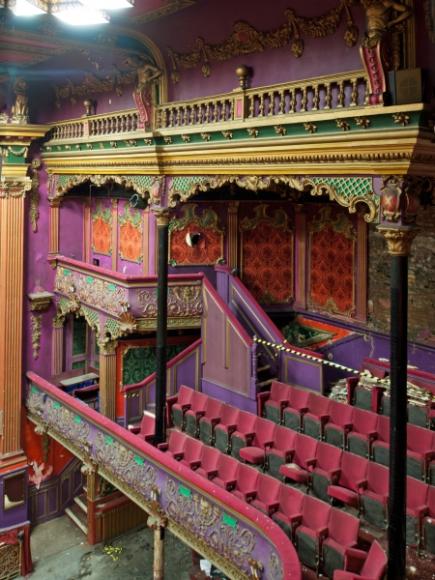 A splendid music hall, built in 1901 which has survived intact. Hulme Hippodrome was built alongside the Hulme Playhouse (1902) by the same architect, J. J. Alley; the two were connected by an arcade which was flanked by the Broadhead Circuit offices. In 1938 the theatre was purchased by the James Brennan Circuit, and from 1942-1949 was home to Frank H Fortescue's Famous Players. After also purchasing the Junction Theatre (Playhouse) in 1950, Brennan extensively renovated and redecorated both theatres throughout. From 1971 until early 2012, the original exterior was concealed behind a rendered ground floor with metal cladding above. The removal of the cladding reveals facades that very much match the Playhouse next door in red brick with a glazed brick string course. The Hippodrome opened as the Grand Junction Theatre and Floral Hall, seating 3,000 and concentrating on melodrama, whilst the adjacent Hulme Hippodrome-later-Playhouse presented music hall. In 1905, the names of the two theatres were changed so that the larger became the Hulme Hippodrome catering for patrons with a taste for music hall. Internally the magnificent auditorium, which has two galleries and a proscenium arch in original state, is a riot of gilded Rococo plasterwork. The basic design is very like the auditorium next door, but apart from this (and other now-demolished theatres designed by J J Alley for the Broadhead Circuit), the concept is quite unlike any contemporary theatre or music hall. The upper of the two balconies has eight straight rows spanning directly between the side walls; the lower one has nine straight rows in the centre, with side arms of four straight rows parallel with the side walls, diminishing to two. The ends are divided off to form a stage box on either side of the proscenium. Above each box is a further box, reached by a little staircase at the side of the balcony. The box and balcony fronts are decorated with delicate Rococo plasterwork. The balconies are supported by iron columns with foliated capitals (some of them Gothic). At the sides the columns are carried up from the balcony fronts to support the main ceiling which is decorated with festoons at the sides and panelled at the centre. The proscenium is surprisingly formal, being flanked by giant fluted Ionic columns with an enriched straight entablature over, and a large central cartouche supported by putti. Lion statutes, originally on brackets either side, now placed either side of the cartouche. Surprisingly, the dressing rooms are decorated with plaster swagged cornices and the circulation areas equally well appointed. The building was last used for theatre in the 1960s, then bingo from the mid 1970s until its closure in 1986, when the Floral Hall was transformed to snooker club and lounge bar. The theatre stood empty, somewhat obscured by its cladding, and housing development in the area. In 2003 an evangelist group purchased the building. They operated from the foyer only, leaving the auditorium vacant and in a very poor state of repair. However, in 2017 the Council served the owner with a Dangerous Buildings Notice and closed the building. The building was subsequently occupied by squatters, who were removed from the premises in April 2018. The building has been vacant ever since. The building has been sold multiple times and remains vacant and in an ever-worsening state of repair. Recent drone surveys carried out by Save Hulme Hippodrome (which formed in 2021 as a result of the building sales) indicate holes in the roof rendering the historic fibrous plaster extremely vulnerable to water damage. There is a need for urgent intervention to halt decay before irreparable damage is caused and the building is lost.