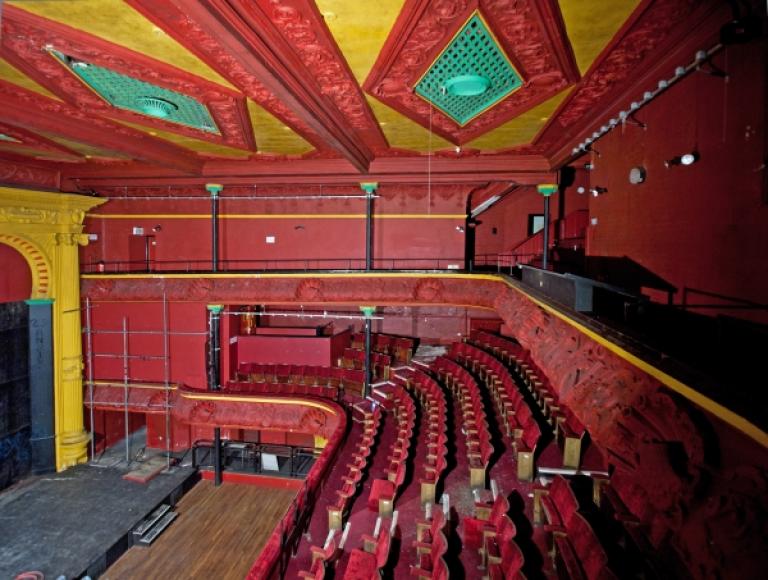 Hulme Playhouse opened in 1902 as the Hippodrome, was renamed the Grand Junction Theatre c.1905, and finally became the Playhouse in 1950. In 1950, it was extensively renovated and redecorated throughout when it was acquired by the James Brennan circuit (who already owned the adjacent Hippodrome). From 1955-1987 it was used by the BBC as a recording studio for radio and television. It is architecturally paired with the adjacent Hulme Hippodrome and although smaller, the design of the auditorium is very similar, with two straight balconies, the front upper balcony set well back from the one below. As with the Hippodrome the first balcony (there are six rows in the centre) returns to the sides with four rows diminishing to two. Unlike the Hippodrome, however, the upper balcony also has slips (of one row) which run along the side walls directly to the proscenium. Again, the balconies and their slips are supported by iron columns, although here, despite the fact that the rest of the plasterwork is Baroque, the capitals are all of stiff-leaf Gothic foliage with polygonal tops, and there is a Gothic frieze and cornice on the inner face of the underside of the second balcony. The ceiling is again divided by beams on the lines of the columns: each section decorated by a lozenge-shaped panel. The proscenium is framed by giant fluted Ionic demi-columns supporting a straight entablature with a trophy of arms above. The balcony fronts are decorated with large shell motifs between trophies of musical instruments. In 1988 the theatre was purchased by the Nia Centre, providing a stage for Afro-Caribbean culture (Nia is Ki-Swahili for 'purpose'). Works to convert the building to an arts centre with 900-seat theatre were supported by Manchester City Council, Arts Council England, and the Hulme and Moss Side Task Forces. However, the Centre closed in 2000. In 2012 the theatre was taken over by Fountain Gate Chapel, a church group which has cleaned and refurbished the building, restoring it for worship, conference and performance use. The Playhouse is situated in an area targeted for regeneration. The area has been substantially redeveloped in the last 20 years, and has good road links to central Manchester. It is a functionally sound and intact venue. The main risk it faces is from the deteriorating Hulme Hippodrome which is causing water ingress into the building. In 2018 NIAMOS, a cooperative, are running an exhibition, arts, and performance space with a micro bakery, music studios, a kitchen and a holistic well-being space within the building, with an overall ambition to restore the theatre.