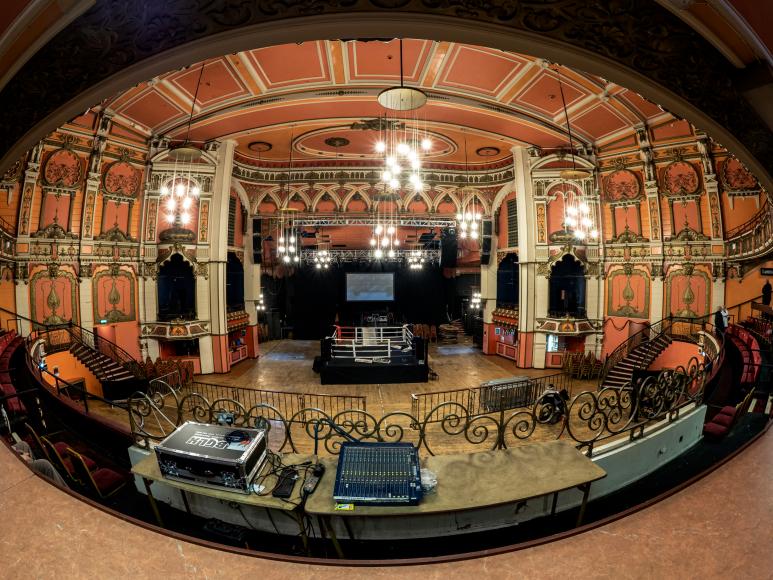 Rare surviving example of a circus-variety theatre (cf Brighton Hippodrome), and despite conversion to a cinema in 1925 and, later, to a bingo and then a discotheque, it is basically intact apart from the raising of the stalls floor to stage level and the insertion of staircases from the ends of the first balcony down to the stalls. The auditorium is vast, fanning outwards from the 14.6m (48ft) proscenium to three very wide balconies at the rear. The first balcony is of 12 rows, with ten boxes underneath at the back of the stalls. Above is a benched balcony of six rows with a further six rows behind a parapet and, above this, a gallery with unpadded concrete steps and serious accessibility problems. The balcony fronts, which are intricately decorated with oriental motifs, are set out on a shallow curve to meet the side walls. These are enriched by three bays of oriental panelling divided by pilasters topped by large plaster elephants’ heads. The rectangular proscenium which has open scrollwork in the corners and interlaced blind arches above, is flanked by two large boxes on each side, at lower balcony level. One of these is facing away from the stage and is surmounted by an opulent onion-domed canopy. It can only have been of use for circus performances. The ceiling, which is canted upwards from the proscenium towards the gallery, is divided into rectangular panels, but is otherwise strangely plain.

The stage is 12.5m (41ft) deep and the grid 20.7m (68ft) high. Originally there was a traditional arena of 12.8m (42ft) diameter projecting half-way into the auditorium and capable of being hydraulically sunk and flooded with water for aquatic performances. Although the pit below still remains, the elaborate machinery has gone. Apart from a small foyer with a deeply-coved ceiling, the front-of-house spaces are very cramped for so large a theatre.

The façade is of enormous width, reflecting the rear wall of the auditorium. The entrance is though a central pavilion with a columned loggia at second floor level, and surmounted by a steep, pyramid roof above a lunette window. The side wings are canted away from the centre and terminate in two-bay pavilions.

After a period of closure, it was bought by the current owner in 1990 and extensively renovated. Renamed Eventim Olympia, it now holds a wide range of events including live music, sports and comedy.