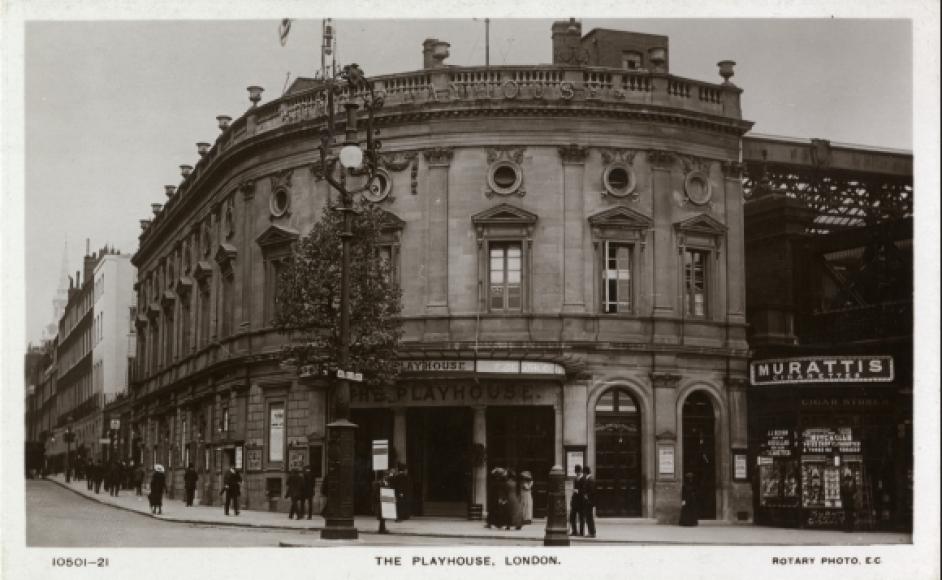 Initiated in 1882 by Sefton Parry, a speculative theatre builder, who bought the site hoping it would have to be purchased from him by the South Eastern & Chatham Railway Company, whose terminus was alongside. He usually claimed to design his own theatres, but, in this case, his architects were Fowler & Hill. Fowler’s pompous, central European-looking Opera House on the Embankment at Westminster Bridge was never built. The Playhouse was in a decidedly lower key, but a pleasing enough architectural event, on a site at the bottom of Northumberland Avenue/Craven Street and visible from the Embankment.

The Playhouse served as a BBC radio studio from 1951 to 1976. In 1986, a move to bring it back into live theatre use was encouraged by allowing upward extension in the form of a sheer attic and a roof storey, available for commercial letting. This ‘sweetener’ was, sadly, not legally tied up so as to provide the theatre with a continuing endowment.

The external elevation in Portland stone, curving round the corner from Craven to Villiers Street, are those of the 1882 theatre, raised in proper classical manner by the additional storey. The figure sculpture above the crowning balustrade of Fowler’s building had long been absent and has not been reinstated.

The theatre had already been substantially altered. In 1905, during a remodelling of the interior, a mass of masonry from the side of Charing Cross station fell onto the theatre, resulting in six fatalities. The compensation, however, made it possible to reconstruct the interior completely in fashionable French taste, to the designs of Detmar, Blow & Billerey (essentially Fernand Billerey).

Excellent foyers, etc lead to a magnificently uninhibited auditorium in Franco-Venetian taste, a design of flowing curves with fine plasterwork and painting. Deep proscenium whose splayed architectural frame embraces two tiers of boxes with spirited female terms carrying the upper tier. The proscenium jambs sweep into a depressed basket arch. The curving walls of the auditorium similarly sweep up into pendentives carrying a dome. The dome, pendentive-roundels and large elliptical-headed wall panels are filled with art decoration, the walls paintings being in a dream-like Watteau-inspired manner. Serpentine balcony fronts in two tiers with slender balustraded upper box fronts, the upper balcony terminating abruptly against the wall paintings. The 1987 decorations did not attempt to reproduce the original Billerey scheme, which was in warm orange and chocolate tones. As a result, the paintings now look too dark for their present bright settings. The painting of the safety curtain at that time in the style of the original act drop was commendable.

Extensive basement accommodation with good headroom below auditorium (This is the result of raising the 1905/7 auditorium by about 1.5m (4ft 11in) above the level of that of the 1882).

There is a splendidly preserved complex of sub-stage machinery, second in importance in London only to Her Majesty’s, with grave bridges, thunder-run, etc.