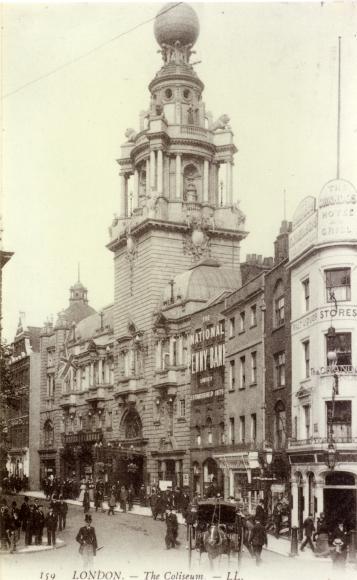 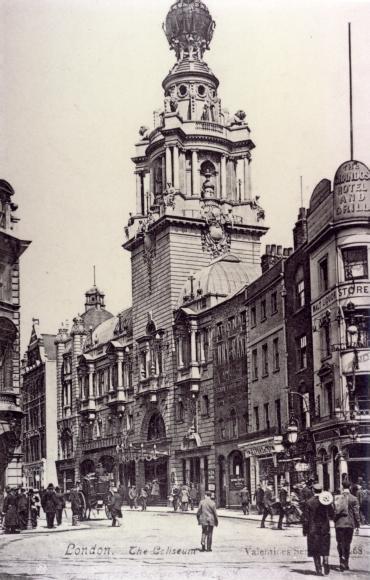 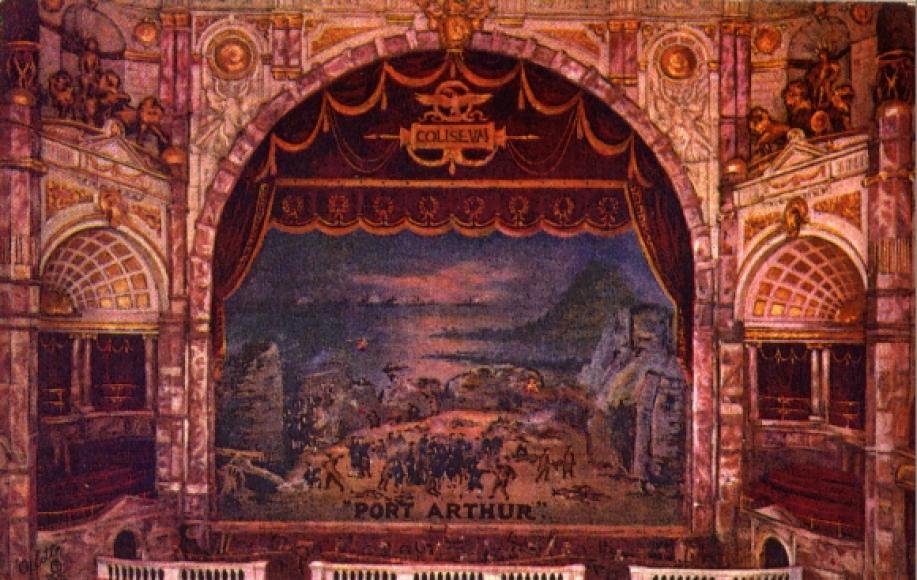 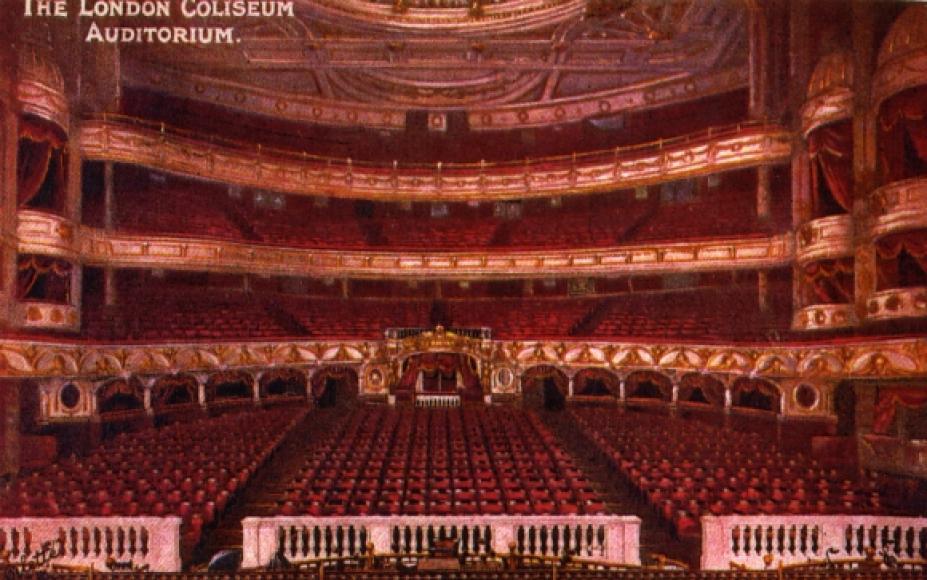 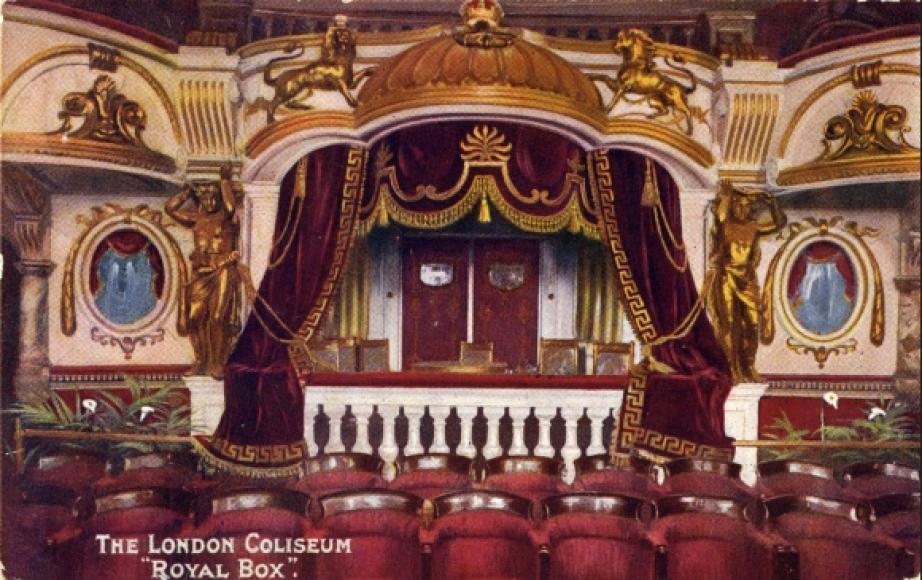 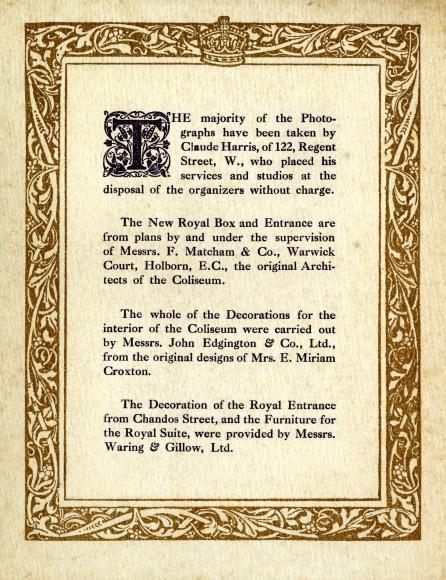 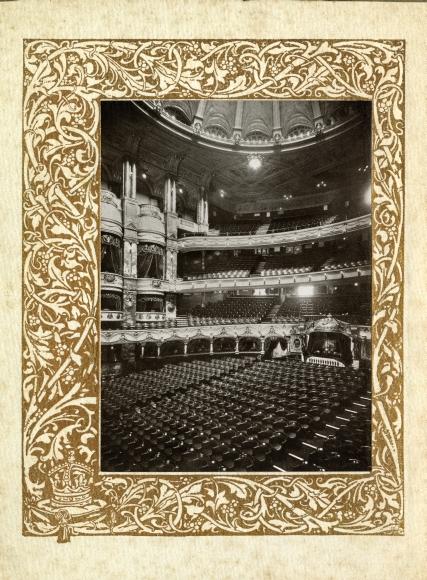 This theatre is of outstanding architectural and theatrical significance, demanding a much more detailed account than can be given here.

It was Matcham’s master-work and Oswald Stoll’s flagship, conceived as a magnificent and elaborately equipped variety theatre with splendidly appointed public rooms, designed for a new West End audience, enticing people in who might never have set foot in an ordinary variety house.

The Coliseum tower dominates the southern end of St Martin’s Lane. Its bold silhouette is important in the view from Trafalgar Square, where it is seen behind and beyond St Martin-in-the-Fields and also from the opposite direction, where the two baroque towers, separated by nearly two centuries, are seen in close company.

Following the 2004 works the theatre looks more like itself than it did for the whole of the second half of the twentieth century. Externally, the terra cotta has been stripped of paint and repaired. The tower has been fully restored to its original design and the curving glazed roofs on either side have been reinstated. Internally, decorations and furnishings have been restored to a state closer to the Matcham/de Jong designs.

Externally, terra cotta in a free Renaissance style, channelled and ornamented with lavishly detailed Ionic orders. Boldly projecting, pedimented and balconied windows set in a shallow loggia at second floor level. Entrance bay off-centre and slightly advanced, forms the base of a channelled, square tower. Iron-stayed entrance canopy set in a giant two-storey archway, then a balconied tripartite window at second floor above which the tower rises high over the façade and is crowned by an elaborate cornice with four over-life-size seated symbolic figures at the corners. Above this, a finely modelled Borrominesque spire derived from the west towers of St Paul’s Cathedral, is elaborated with sejant lions and crowned by an illuminated rotating globe supported on the shoulders of slaves and bearing the sign ‘Coliseum’. The May’s Court flank elevation also bears the name in giant Art Nouveau letters.

Vast auditorium, of Roman grandeur, whose capacity (2,358) exceeds those of both Drury Lane Theatre Royal and the Royal Opera House. A superbly modelled room, seducing the eye in every view. The furnishings and drapes, including the magnificent tympanum and house tabs, were reinstated in 2004. At the back of the stalls there is a ring of stalls boxes which originally had at its centre Britain’s only permanent central Royal box. The Grand Circle rises over and behind these boxes, there being no overhang at all. Over the Grand Circle there are two further ‘cantilever’ balconies with pairs of two-tier boxes on either side and, between these and the proscenium, elaborate niches, originally for an auditorium choir, but subsequently converted to stage boxes (that on stage left, the Royal Box) on two levels. Fine domed ceiling in the style of a velarium, which originally had an openable ‘hit and miss’ centre for instant air change between performances (no longer operating but all restored to its original appearance).

Very large stage. The pioneering triple revolve was removed in 1976-77.

The long lost Art Nouveau tea rooms have not been re-created, but the space gained by reinstating the glass roofs that formerly sheltered them has permitted outstanding improvements to the circulation and bar facilities, etc at upper levels.

The theatre is the home of English National Opera.