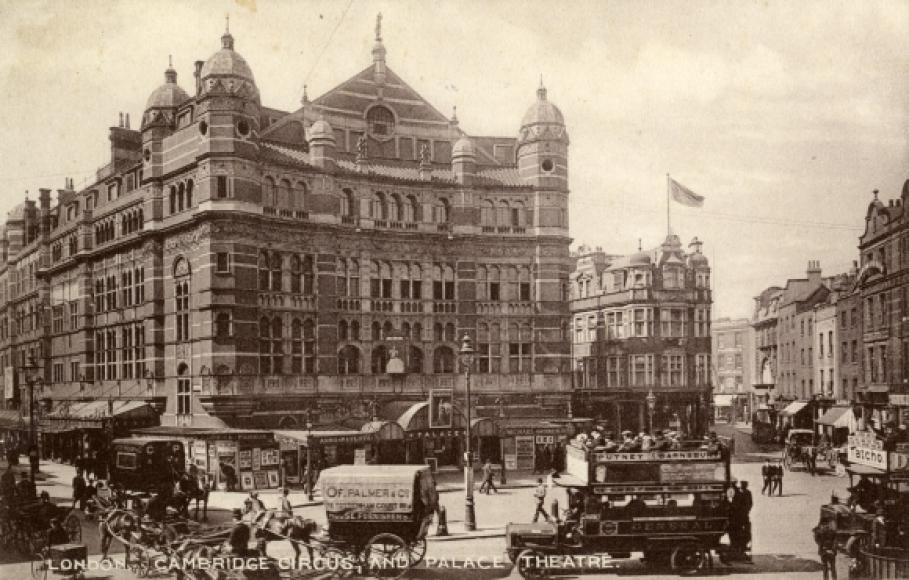 An outstandingly important late Victorian monument, built for Richard D’Oyly Carte as a home for English grand opera. Having failed in this role it became a highly successful variety theatre and in more recent years, a home for major musicals. It is extraordinary to think that a building of this quality was ever seen, as it was in post-war years, as little more than an opportunity for profitable redevelopment. It was hideously defaced externally in the 1950s, by the shaving away of a great deal of the terra cotta ornament and, about the same time, the interior was painted over, smothering the marble and other fine finishes, with a job lot of plum red paint. Much of this damage was, however, made good in 1989 when the exterior was spectacularly restored.

The authorship of the building was a matter of interest and discussion in 1891/2. It was said not to have had an architect in the regular sense, being credited to D’Oyly Carte himself, but a team was involved, over which he, no doubt, exercised autocratic control. G H Holloway provided the initial drawings, afterwards acting in the role of general contractor. J G Buckle was what would now be called the theatre consultant, ensuring that the sightlines worked and the means of escape satisfied the official controllers. The distinguished architect T E Colcutt was appointed after the plan and principal lines of design had been determined, to dress the exterior, the auditorium and other public spaces. This design by committee should have resulted in a mess, but, in the end, it created a fine theatre and a major London landmark.

As well as having the rare advantage of being on an island site, the Palace is architecturally unlike any other London theatre (although the early designs for the Clapham Grand could be seen as a homage to Colcutt’s Palace treatment). The elevations are in Colcutt’s free early northern Renaissance manner, with octagonal shafts dividing the red brick and terra cotta banded façade into bays, with many small arched windows, linked vertically and horizontally into varied groupings, all with terra cotta balconettes and floridly ornamental friezes. The shafts and octagonal corner towers rise above the parapet and are crowned by domes. A broad, banded gable rises behind the main façade facing the circus.

Vestibule with marble and alabaster staircase. Opulent auditorium with three balconies; marble and onyx linings. Reputedly the first in Europe to be ‘cantilevered’, ie with no columns supporting the balconies.

The relics of Walter Dando’s hugely elaborate opera machinery, above and below the stage, are unique in London and of considerable archaeological significance. The wood and iron installation, occupying a deep cellar and mezzanine, has had all its moving parts taken away, but what remains is a forest of framed timber with traps, chariot slots, etc. Restoration could only be achieved at prodigious cost and would provide little practical advantage, but expert recording is called for if removal is contemplated.