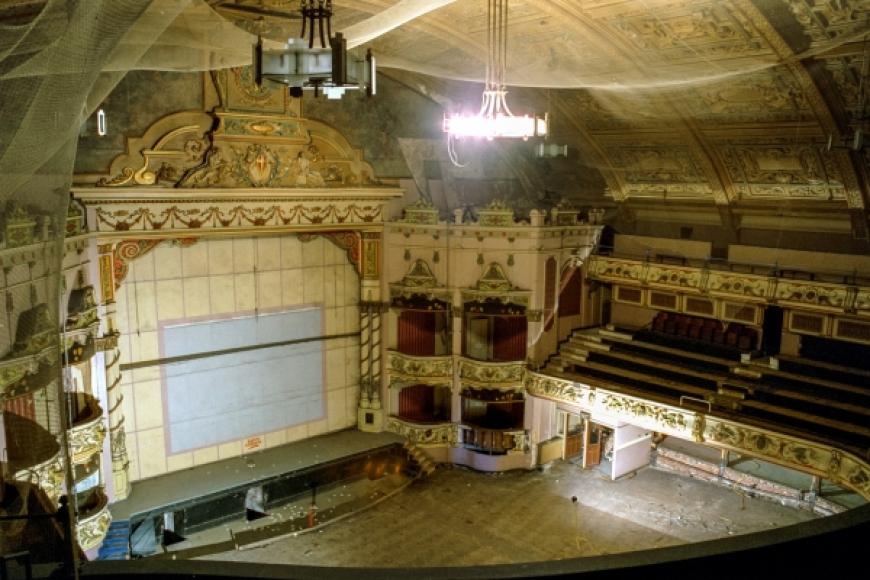 This is a music hall of a rare type, probably now unique of its kind (following the loss of the Islington Palace, London, formerly Mohawks' Hall of c.1869, demolished 1982) - that is, a big concert party or minstrels' hall. It was built in 1897 to the designs of Mangnall & Littlewood, with Frank Matcham as consultant. Prominently sited on the sea front, the main elevation is an ornate, symmetrical composition in brick and terracotta. A big central gable with an elaborately scrolled outline expresses the rear wall of the auditorium and is flanked by projecting square towers with shaped gables. At ground level, the entrance is set between shop fronts. Internally, a flavour of Matcham is detectable in a building quite unlike any of his surviving works. The general form must be Mangnall & Littlewood's although the design of the balconies and some other details may have been modified as a result of Matcham's involvement. The foyer is richly appointed, with mosaic, coloured and modelled faience tiling and plaster decorations and a pair of remarkably preserved bow-fronted ticket kiosks. The stair hall is equally elaborate, with marble, coloured tiles, and fine joinery. This leads to curving promenades at two levels with glazed screens looking into the hall. The hall itself is impressive - very wide and covered by a vast segmental tunnel-vaulted ceiling which soars over the whole space, including the area over the tops of the boxes, and is divided into richly decorated panels. The curve of the ceiling embraces a huge tympanum above the proscenium and boxes, decorated at the sides with painted muses etc. The proscenium is framed by coupled columns with garlanded shafts supporting an enriched entablature and an elaborately modelled, scrolled and panelled gable-like attic ornament. On either side are two tiers of paired boxes set in splayed pavilions against which the balconies terminate. A deep serpentine-fronted balcony returns along the side walls with five rows of seats. The upper (gallery) tier is set back and has shallow slips above the side promenades of the lower tier. The fly tower is plain rendered with dressing rooms on either side. For some conventional stage productions this great space has too large a capacity and too small a stage. The narrow proscenium also makes the sight lines from the side slips a little uncomfortable and this limits usable capacity for stage shows. However, the large floor area permits the staging of all types of events with temporary seating, making the side balcony seats saleable. In 1978 an action group fought and obtained listed status for the theatre. However, the original glass-roofed Winter Gardens building adjacent was demolished and replaced by an amusement arcade development. It was understood that one reason for permitting this development was that the music hall would be restored and reopened, but, in the event, it fell into a seriously dilapidated state. The Friends of The Winter Gardens was formed in 1986 to support the remainder of the Winter Gardens complex and in 1997 started a campaign for restoration and repair, with the exterior elevation restored. In 2006 the Friends helped to create the Morecambe Winter Gardens Preservation Trust Limited to purchase this amazing building and continue to seek funds to restore and reopen it. The Winter Gardens is a highly visible, architecturally striking building in the heart of Morecambe. The Morecambe Winter Gardens Preservation Trust continues to repair and look after the building. It is now able to programme events, but with such a large structure, there is still much to do.