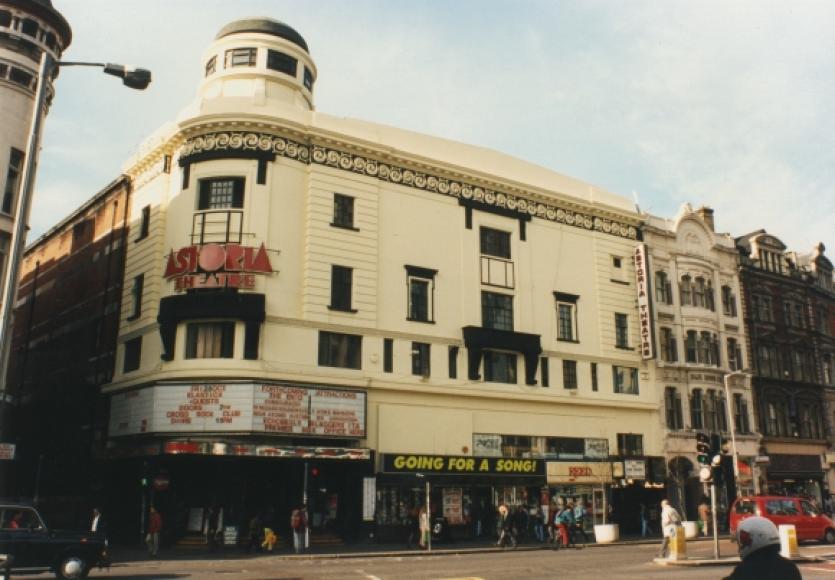 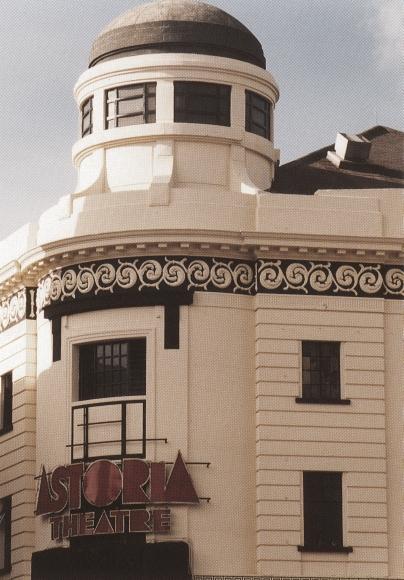 The Astoria was a conversion of a Crosse & Blackwell factory which made Branston pickle until it moved out in 1927. It was the first Astoria cinema designed by Edward A Stone, who went on to design the Astorias at Brixton, Old Kent Road, Finsbury Park and Streatham for Arthur Segal. Conversion to full use as a theatre was in 1977, when the auditorium was completely redesigned and the stage improved. In 1984 the theatre closed, and from 1985 it successfully operated as a nightclub and live music venue. It was demolished in 2009 to provide space for Crossrail and Tottenham Court Road Station improvements. The site above the station received planning permission in April 2012 to include retail and office units but it will also include a theatre seating between 350 and 500. The theatre will be operated by Nimax Theatres and is scheduled to open in 2020.

The following is a description provided in 2008 for the Astoria:
The exterior is four storeys high, stuccoed to the Charing Cross façade and entrance return with an enriched frieze and cornice under a plain attic balustrade. The corner entrance, in Charing Cross Road, is rounded and marked by a short domed tower. Feature windows of the building have either bracketed hood moulds or shallow ornamental balconies. The rear is constructed in brick and decorated with stone string courses. There are shops at the right of the corner entrance at street level.

The auditorium originally had a heavily panelled barrel-vault ceiling, and a balcony curving to side slips and false arched boxes which concealed the organ pipes. The square proscenium carried a sunburst cartouche in a heavy ornamental band, and was emphasised by engaged Ionic columns at either side, meeting a wide ornamental cornice which carried on over the proscenium. There was an orchestra pit, with the organ at centre, and a deep stage with dressing rooms and full facilities. In 1968, the interior was redesigned in more modern style, with plainer lines.

Conversion to full use as a theatre was in 1977, when the auditorium was completely redesigned in very plain, sweeping style, although elements of the former dress circle bar, staircases and ante-proscenium remained intact. There was no proscenium arch, but a wide end stage to accommodate spectacular productions. The passage from rear stage to front-of-house is rather unusual. Discotheque space was accommodated in the basement where, in 1928, there had been a ballroom dancing salon.

In 1984 the theatre closed, and from 1985 it successfully operated as a nightclub and live music venue. The main space had a capacity of 1,600-2,000 and was connected to Astoria 2, with a capacity of 1,000. The two separate spaces could also function as a single venue. It played host to many up-and-coming bands, and after Mean Fiddler acquired the lease in May 2000 it became one of London's primary choices as a venue for well-established performers.

The freehold was sold in June 2006 to Derwent Valley Central and between April and October 2009 the building was demolished to make way for the eastern ticket office for Crossrail.