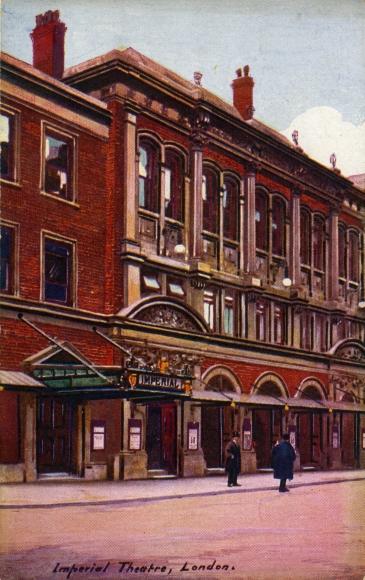 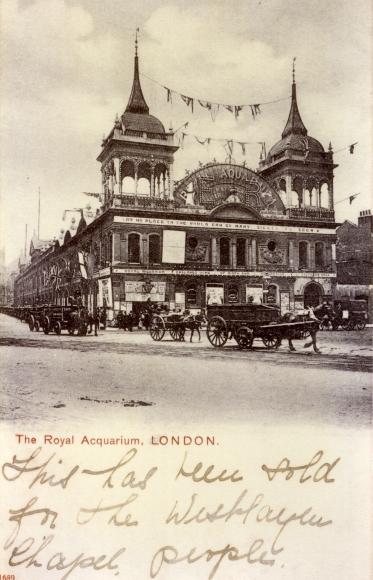 The Royal Aquarium Summer & Winter Garden was an entertainment complex like a smaller scale Crystal Palace or Alexandra Palace, presenting (in addition to its aquarium attraction) a wide range of entertainments, including variety, orchestral concerts, dance companies, circus-style acts, the firing of a woman from a cannon, the exhibition of the first gorilla seen in England and so-on. It opened in January 1876 and the theatre attached to it opened in April the same year.

With some alteration, the original theatre remained in use until it was taken over by Lillie Langtry in 1900. She commissioned a completely new theatre (only the dressing room wing of the old building was retained), designed by Frank Verity. Its interior was unlike that of any other London theatre.

The Veritys, father and son, were Francophiles and this interior, by Verity the younger, was an impressive invention in Empire style, though perhaps, like his Scala, calculated more to delight the architectural cognoscenti than theatregoers.

The auditorium had neither painting nor gilding, relying entirely on coloured marble linings and chaste plaster modelling. The proscenium was treated like a pedimented temple front, with gorgeously appointed bow-fronted oriel boxes on either side. The boxes were, thankfully, less intrusive than the monsters in Verity’s 1904 Scala. There was no painted act drop or tableau curtain, but a richly festooned green velvet drop curtain. Lighting was by electricity throughout.

Externally, Verity’s theatre had a five-bay, three-storey façade with arcaded openings on the ground floor and an order of Corinthian columns on tall pedestals articulating the upper storeys. The entrances in the outer bays were each framed by coupled columns supporting an entablature and segmental pediment.

The theatre closed in 1907 but the interior was dismantled and recreated in 1908-9 as the Imperial, Canning Town, on the site of the former Royal Albert Music Hall. This in turn was destroyed by fire in 1931.

The site of the Royal Aquarium is now occupied by Westminster Central (Methodist) Hall.