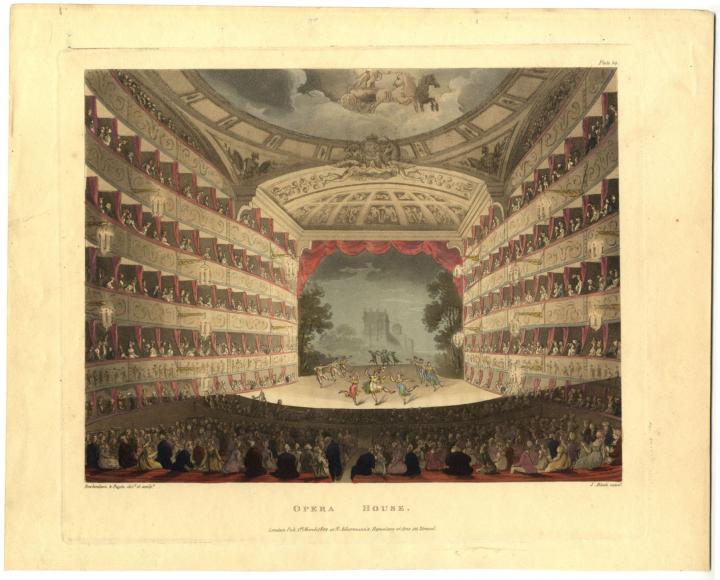 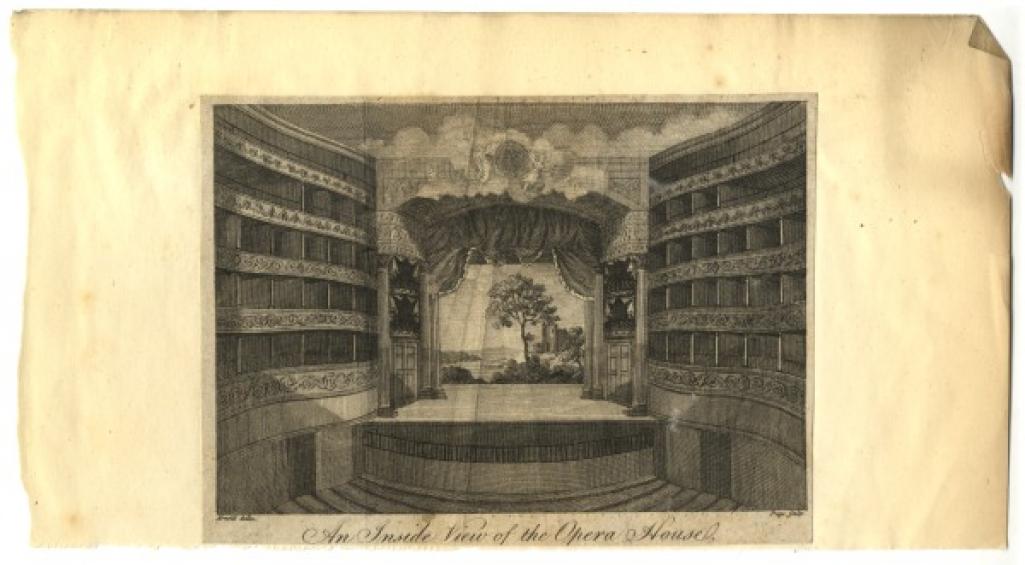 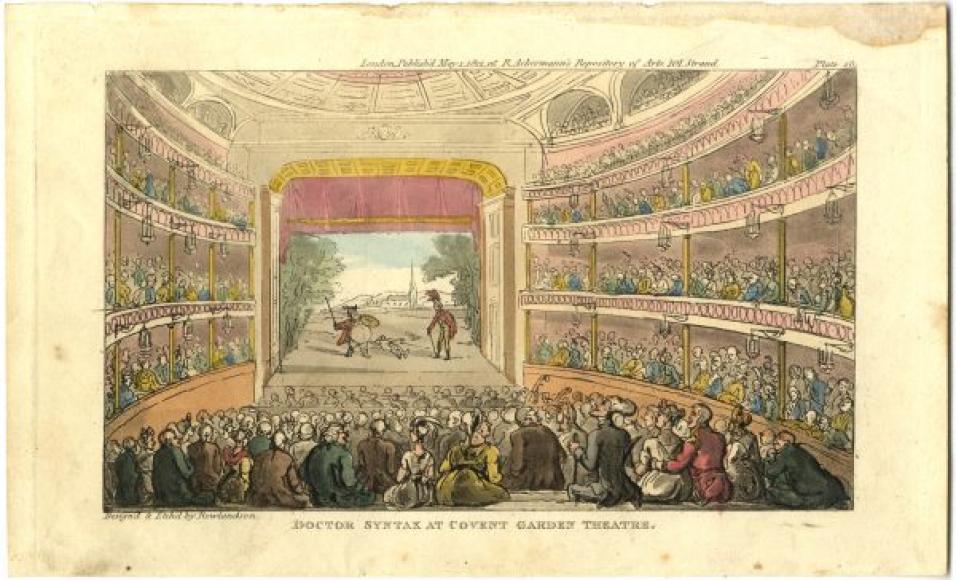 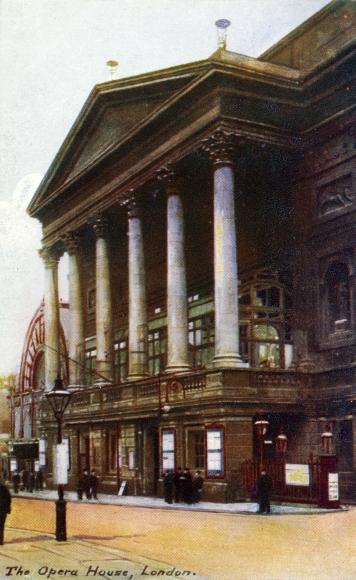 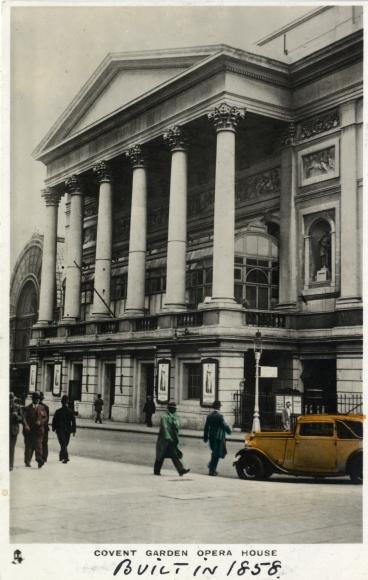 The present building is essentially that designed by Edward M Barry in 1857 and opened in 1858 (together with the adjoining Floral Hall, opened 1860) but with some sculptural work salvaged from Smirke's theatre. The Opera House is an imposing monument in E M Barry's Roman Renaissance manner. Although it has always been seen in the main from narrow streets in foreshortened views, its impact is considerable. On the Bow Street front a tall hexastyle Corinthian portico is raised on a rusticated base, formed by the enclosure of the original porte cochère. The façade incorporates two magnificent bas reliefs by Flaxman and carved by Rossi and one statue each by Flaxman (the Comic muse) and Rossi (the Tragic muse), all from the 1809 theatre. The upper level of the portico contains a glazed conservatory, extending the crush bar.

On the departure of Covent Garden fruit and vegetable market to Nine Elms in the 1970s, the entire island site occupied by the Opera House and surrounding properties, including property on the opposite side of Floral Street, was acquired. The first phase, an elongation of Barry's building toward James Street, was completed in 1981, replacing the dressing rooms, etc built in 1933.

As seen now, following the 1999 reopening, Barry's Opera House appears as one element in a unified (but not architecturally uniform) development bounded by Bow Street, Russell Street, the Piazzas, James Street and Floral Street and incorporating the Floral Hall, a second auditorium and orchestra rehearsal space, offices, ballet rehearsal rooms, scene stores, painting room and ground floor shops. The new elevations to the left of the old façade in Bow Street and Russell Street are frankly modern and relatively low-key (apart from the iron and glass end of the Floral Hall) but, facing the Market, a colonnaded ground-floor provides an historical echo of the Inigo Jones arcades which are now represented only by Clutton's Victorian reinterpretation on the north west side of the market. Turning into James Street, the façade of the 1981 extension is in a Barryish Italianate style returning to Floral Street and linking with the flank of Barry's theatre. The raised fly tower, seen over the loggia promenade crowning the Piazza elevation, is a considerable landmark.

The Floral Hall, restored and raised in height, now roofs a majestic public space with escalators and viewing balconies. The loss of the façade toward the Market, which was a witty iron paraphrase of the Inigo Jones façade originally surrounding the Covent Garden piazza, is much to be regretted, but it is difficult to see how it might have been incorporated into such a comprehensive redevelopment project.

The interior of the old Opera House is superb. 'Few would dissent from the view that (it has) the most beautiful auditorium in Great Britain' (Survey of London, 1970). It has been improved and refined in a number of ways, including the re-raking of the stalls and (by virtue of the rebuilding of the stage house) raising the previously oppressive pelmet to give greater working height to the stage, which is now multi-zoned and equipped to the highest modern standards. Only the keenest observer in the audience would be aware, however, of the changes which have been made.

The auditorium was designed (as were many earlier theatres) to be readily convertible to ballroom, assembly room and exhibition hall use. The design is a compromise between the European style of box-tiered opera house and a deep-tiered playhouse. The well of the auditorium (originally pit and stalls) is enclosed by the lowest box tier, above which there are three horseshoe tiers of balconies cantilevered forward from their supporting iron columns, plus an amphitheatre-gallery. By the 1930s most of the old box-divisions, with their twisted gilt shafts, had been removed and rearranged and the benched amphitheatre slips and gallery were rearranged (1964) as a single, spaciously-seated tier extending back from the top balcony and again rearranged in the 1999 work. The horseshoe curve of the main balcony fronts is governed by a semicircle of the same radius as the saucer-domed ceiling, which is supported on four elliptical arches and pendentives, the arch on the west side enclosing a parabolic sounding board above the stage, which formerly had an apron of the same depth as the recess so formed.

The plaster ornament is rich and robust. The proscenium has a coved frame with gilt twisted shafts on either side, which were originally designed to move (and now do again) thereby widening the scenic opening. The sounding board carries a modelled relief of symbolic figures by Monti. The tier fronts, also by Monti (and not to Barry's taste) are of bombé section, enriched with trellis and foliage and divided into bays by winged female terms. The saucer dome has a wide margin band and panelled sectors with a central oculus.

Barry's splendid grand staircase and entrance hall, crush bar and Royal suite are somewhat altered, but, as with the auditorium, the original design has not been damaged and the auditorium decorations, in cream, crimson and gold, are still much as Barry wished them to be. The 1858 theatre completely abandoned the old scene groove system, all back scenes being flown. The stage was completely reconstructed between 1899 and 1902 by Edwin O Sachs with a flat stage surface and elaborate metal machinery, now replaced after detailed recording. It was the most extensive system of sub-stage machinery of the kind existing in London.

No brief summary can do justice to this building. Covent Garden occupies a key position in the history of the theatre, opera and ballet in England. The theatre shares with Drury Lane the distinction of never having been subject to either Lord Chamberlain's or local authority formal licensing control. Its right to present theatrical entertainment derives from the Royal Patent conferred by Charles II on Davenant in 1662, which after many vicissitudes, came to rest on the present site. The document itself is in the Philip H & ASW Rosenbach Foundation Museum, Philadelphia (sold after the fire of 1856), but the fact that Gye re-opened his opera house in 1858 without a licence is evidence that the Lord Chamberlain accepted that the patent was still effective and its authority attached to this site and no other. The exterior is later in date than Drury Lane, the Haymarket, the Lyceum and the main shell of the Old Vic, but the Royal Opera House is the oldest theatre building executed to a single design now standing more or less intact in London. Its architectural importance cannot be overrated.