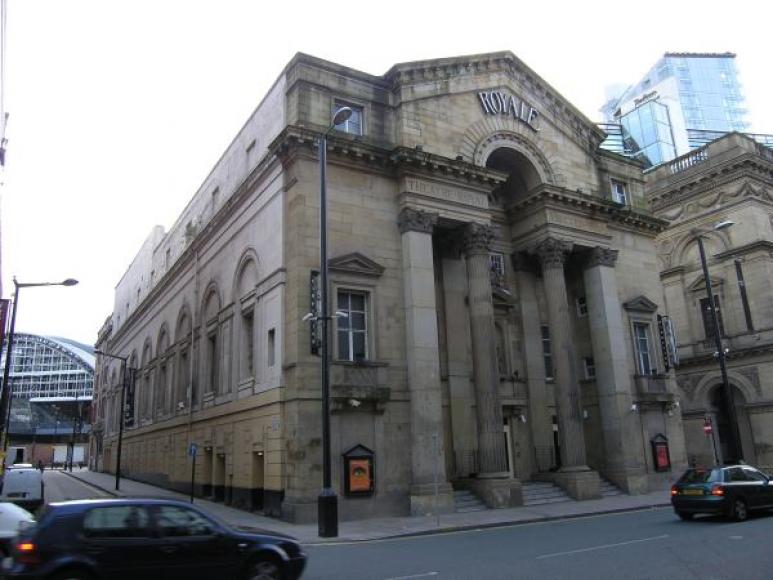 The Theatre Royal is Manchester’s oldest surviving theatre building. Built in 1845 on an island site, it is an impressive building in Classical style. The giant recessed portico with fluted Corinthian columns dominates Peter Street. The monumental facade is one of the finest examples of theatre architecture to have survived in Britain from the first half of the nineteenth century. It is symmetrical, stuccoed, in three unequal bays with three storeys and an attic. The modillioned cornice is treated as a parapet, and gabled in the centre. The portico contains three steps to three altered doorways, with a pedimented aedicule in the centre with a Carrara marble statue of Shakespeare leaning on a pedestal. The entablature bears a frieze inscribed ‘Theatre Royal Erected 1845’. The facade of the Theatre Royal, as well as Cockerell’s banks were clearly a source of inspiration for Richardson and his partners when designing the front of the Royal Opera House in London. A massive water tank was incorporated into the roof in case of fire. Originally with three curved balconies culminating at proscenium boxes, and designed for drama and opera, in 1921 the auditorium was remodelled as a cinema. From this time it had two balconies, connected to an elaborate proscenium arch by balcony slips. The ornate ceiling, now not easily visible, has deeply coved sides and basketwork enrichment reminiscent of Covent Garden. In 1972, the building took on a new lease of life as a bingo hall and, following conversion to a nightclub in the 1990s, various lighting bridges and gantries were added. The 1845 facade is virtually intact, and the building retains many internal features of interest and warrants further investigation to its significance, including the importance of its stage machinery which is understood to have survived. The internal conversion to nightclub use obscured rather than destroyed the theatre interior, which appears to be capable of restoration. The former theatre ceased use as a nightclub in 2009 and is now vacant. It was bought by the Edwardian Hotel Group for redevelopment in 2012, but its use is yet to be decided.