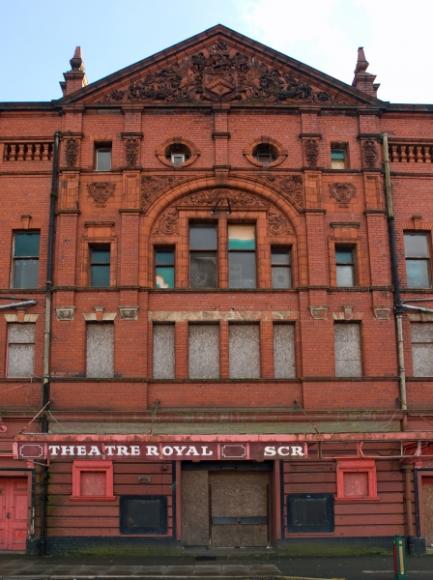 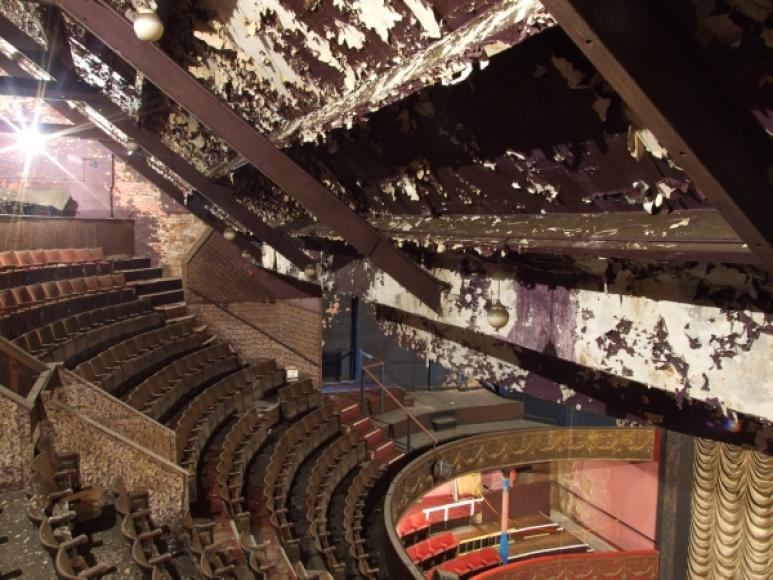 The Theatre Royal was opened in 1902 as a replacement for the first Theatre Royal, which stood in Frank Street. Its owners, the Hyde Theatre Company Limited, had secured the land for a newer and better theatre in 1901, and it opened as the New Theatre Royal in 1902 seating 1,000. The frontage to Corporation Street is restrained, ornamented in red brick and terracotta: three storeys high in three major bays, and in the centre an arched, shallow recess with a semi-circular arched head and pilasters rising from corbels to support a triangular pediment, richly decorated with moulded brickwork. The auditorium is intimate, with two balconies supported on slender columns curving round to meet the proscenium. Balcony fronts decorated with plaster swags and drops. Simplified proscenium arch decorated with shell cartouche, Hyde coat of arms and figures holding garlands depicting six plays of Shakespeare. Deep coved cornice with more swags, ceiling divided into panels by reeded bolection mouldings and central sun burner. Plain auditorium walls. Suite of dressing rooms are set at the side of the auditorium. Original mahogany bars survive. In 1914, the theatre was leased for cinema use and called the New Royal Cinema, but the name of Theatre Royal was soon in use again for the regular pantomimes, variety and local shows. In 1950 it became a repertory theatre for two years, and thereafter reverted to cinema with only Christmas pantomime and occasional shows until the 1960s, when it was used largely as a cinema. The last live show was staged in October 1972, after which the stage area was converted to a second cinema. The building finally closed as a cinema in 1992. Despite prolonged disuse, the auditorium remains undivided, retaining much of its theatrical atmosphere. The flies, grid and 13.4m (44ft) deep raked stage also remain and conversion back to live use would be feasible. The theatre is well situated in the town centre, and sits adjacent to the much smaller Festival Theatre, which is currently used by amateur theatre companies. Demolition consent was given in 1999 and plans for a redevelopment scheme approved. However the building was spot-listed in April 2000, preventing its demolition. A Building Preservation Trust (Theatre Royal Onward) was set up in 2001, with a view to acquiring the building, but it was offered for auction in 2005 and acquired by a private investment company in 2006. In July 2011 the owners commenced agreed works to the building, removing asbestos and dry rot, and dismantling an inserted second cinema on the stage. However, its future remains unclear. The building was placed on the market for sale or let in September 2012 and it was auctioned on 11 December 2013, however this did not complete. The building was sold to Hyde Islamic Resource Centre in November 2016. Since taking ownership the Hyde Islamic Resource Centre has been granted listed building consent to carry out repair works on the roof. It has also been granted permission to screen off areas of the building to allow partial reuse at stalls level of the auditorium and front of house, and for unsympathetic alterations to the exterior and interior of the theatre to facilitate its use as a cultural centre. The rest of the building remains vacant.