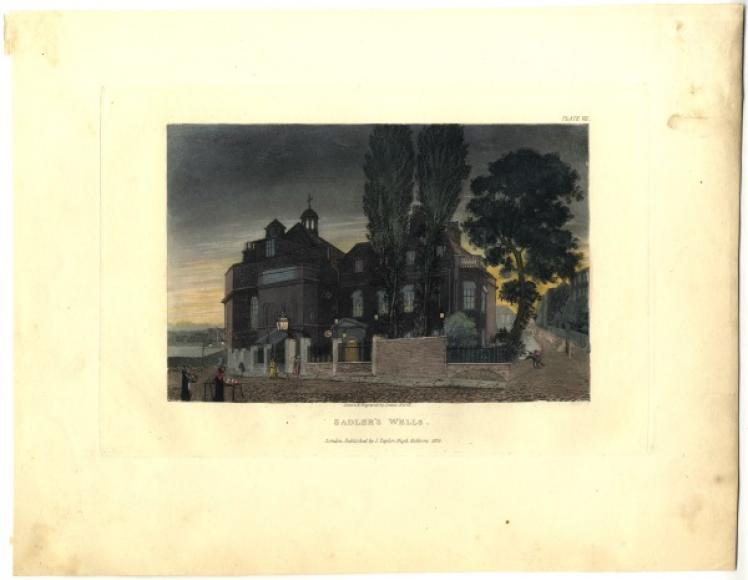 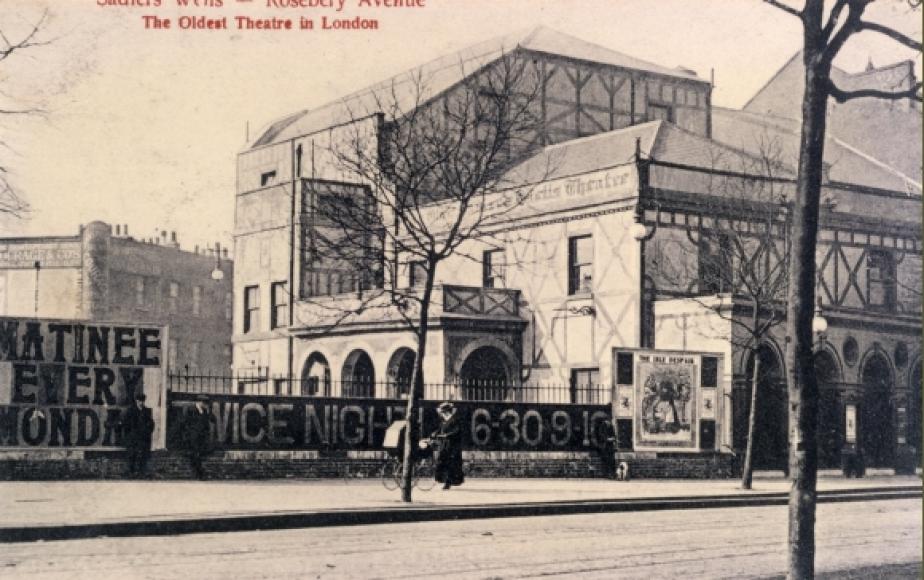 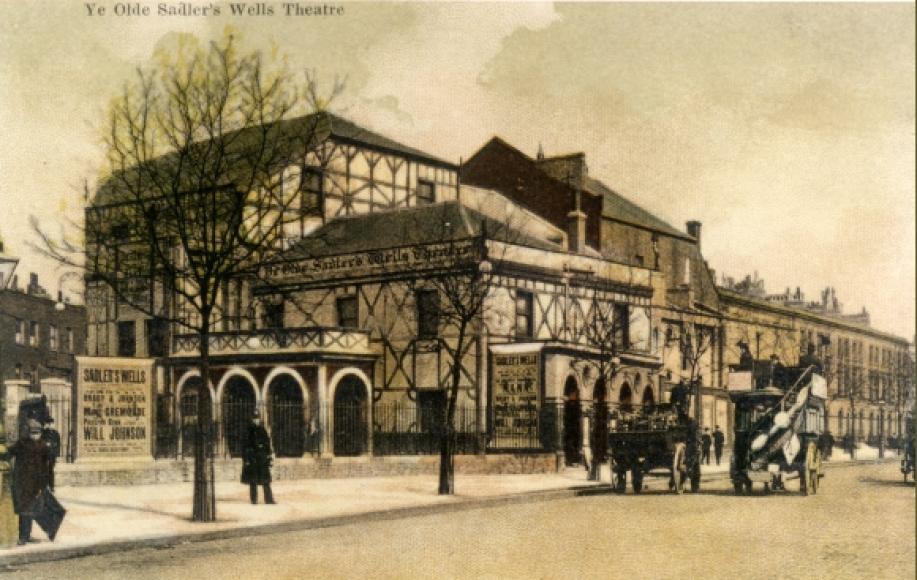 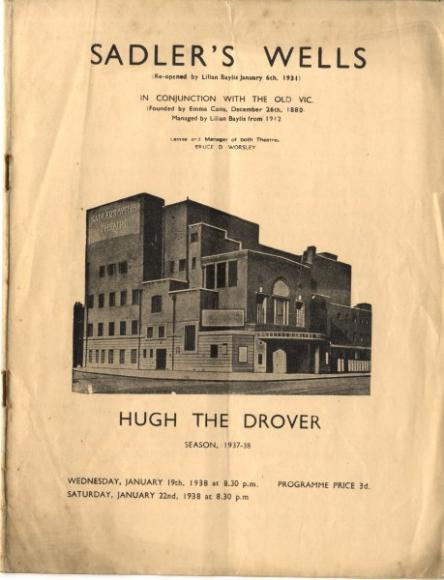 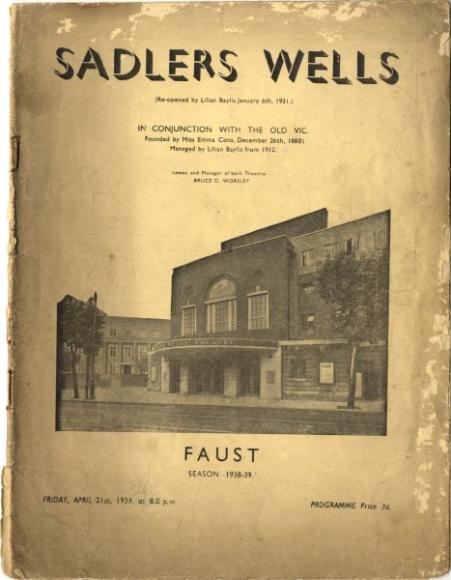 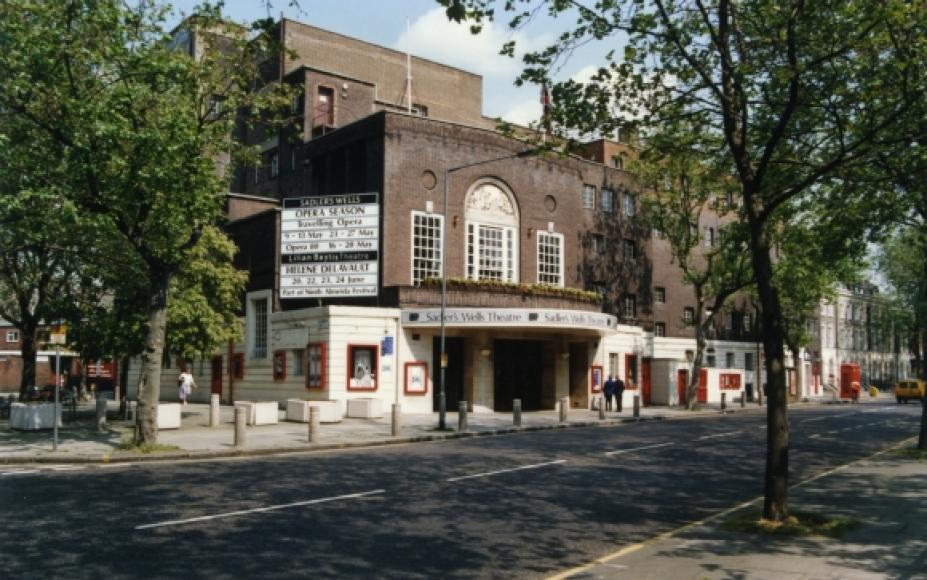 Located in Islington in north London, the current theatre is the sixth to have stood on the site since it was first built. A wooden 'musick house' was originally erected on the site in 1683, after discovery of medicinal wells in the grounds of Thomas Sadler. As a location, therefore, the Wells's record of almost continuous occupation by an entertainment house is exceeded only by that of Drury Lane. It presented, at various times, popular work of outstanding elaboration and quality with, for example, Charles Dibdin's nautical dramas, the great clown Grimaldi and spectacular pantomimes, but its career was as erratic as that of any other 'minor'. It was not until the breaking of the Patent Theatres monopoly in 1843 that it became a mainstream theatre under Samuel Phelps. His productions of Shakespeare made theatre history. After a number of ups and downs, it became a music hall in 1893, then a cinema. In 1906 it fell into dereliction. Acquired in the 1920s by a charity initiated by Lilian Baylis, it was completely rebuilt and opened in 1931 in harness with the Old Vic and with the same policy of bringing quality theatre to the people. From 1934 it was dedicated to opera and ballet. Closed during World War II, it reopened in 1945. Sadler's Wells was one of the first theatres in London to be protected by inclusion in the Statutory List, an honour which must have been bestowed more in recognition of the historic 'holy ground' reputation of the site (and its wells) than for reasons of architectural quality. Chancellor's 1931 building was, as to external appearances, an interesting product of its uncertain period, but the auditorium suffered from the distancing effect of bare side walls and a stage which seemed to be viewed across a chasm. What visual attraction it had was finally put paid to by Bagenal's acoustic canopy which obscured the relief panel over the proscenium arch. The wing space on stage left was always cruelly restricted for what had become one of the nation's most respected dance houses. A major lottery-funded rebuild in 1998 resulted in essentially a completely new theatre with greatly improved relationship between stage and audience and a totally rebuilt stage house despite much of the old fabric being retained. The main foyer is now a single large tapering space containing a series of floating galleries. A row of columns at each level symbolizes the movement from outer more public areas to inner more intimate ones. Two enclosing walls were devised as protection from the external environment, separated by a sheer glass pane on the front facade. The perimeter walls are treated as simple planes, occasionally broken to reveal the projecting volumes of the meeting rooms and the fly tower. Natural light floods the rear wall afternoons and evenings, making the front facade transparent. In the auditorium, the need for good sightlines to all four corners of the stage and the need to accommodate the acoustic demands of both live orchestral sound and recorded music resulted in concealed acoustic devices adjustable to suit different types of music, an adjustable height proscenium and stalls seating rows moveable on air pallets. The auditorium has been lined with metal gauze panels that take dramatically transforming light and image projection allowing directors and designers to continually change the ambience of the space. For even more flexibility, the screens are demountable and reveal gallery platforms usable either as staging or to provide boxes for an audience. The auditorium is steeply raked on 3 levels with 2 boxes, 3 levels of side gallery, stalls seating demountable on rostra for promenade or flat floor set-ups that can be configured to seat between 1,000 and 1,800. The Lilian Baylis Theatre, a separate 200-seat studio, presents small-scale, studio work by emerging and established artists. Refurbished in 2007 with a suspended ceiling fitment running to the reception desk, its entrance became the main stage door and entrance to the cafe. The theatre was relit and stripped of its redundant lining making a significant improvement to the acoustics. Retractable raked seating and three private dressing rooms now allow it to be used for commercial hire.