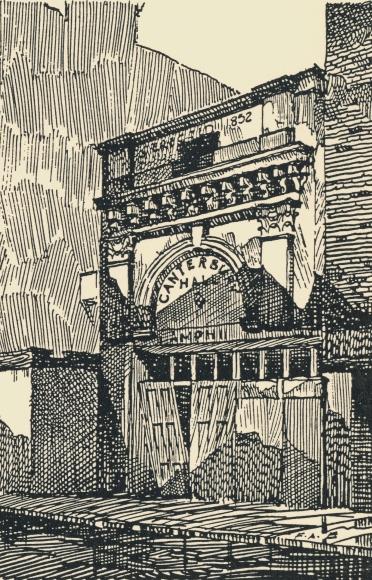 Charles Morton’s Canterbury Hall was a key building in the history of music hall and the architectural progenitor of a whole generation of buildings. It was not, as is often said, ‘the first music hall’ and Morton was not ‘the inventor’ of music hall entertainment, but the second Canterbury was, beyond argument, the first of the giant grand music halls that began to appear behind pubs in the 1850s. Morton was the first proprietor to bring together all the best trends in pub concert entertainment, poaching talent from the musical theatres, pleasure gardens and concert rooms and setting a standard that had to be adopted by any serious competitor.

His ambitions for improving on the old Evans’s song and supper room tradition (his stated model) by employing a strong resident corps of evening-dressed operatic soloists, glee and ballad singers, did not take permanent root in mid-Victorian music halls, but in every other respect the influence of the Canterbury was crucial.

The history of this music hall has been much confused by the repeated misdating of key events, starting with a Select Committee report in 1866 and continuing to the latest edition of Grove’s Dictionary of Music & Musicians. Morton’s first licences for a singing room (not a music hall) at the Canterbury Arms public house were granted possibly in 1849 and 1850, certainly in 1851. In 1852 he opened his first Canterbury Hall, built over the pub’s skittle ground. This was a fairly typical pub concert room (its dimensions were roughly the same as those of the 1846 Grand Harmonic Hall, later Winchester) but exceptional in the quality of its presentations and in its proprietor’s flair for publicity. Perhaps Morton’s most daring catch was Sam Cowell, the popular comic singer, who was to become one of the first real stars of the new style music halls. It was a daring that brought audiences over the river to a mean street in Lambeth.

The success of the 1852 hall was such that Morton immediately set about building a new hall of unprecedented size, interrupting his programme for only a few days between the closing of the first hall and the opening of the second. This was achieved by building around and over the small hall, opening half of the new hall (the stage end) in October 1854. The two-year-old building was then demolished and the new hall opened in its complete form in January 1855. Acquiring additional land, Morton went on to build a vestibule, grand staircase, smaller supper room and art gallery, the whole complex being opened to the public in 1858.

The earliest sketch plan so far seen for this building shows a proscenium stage but a view of 1856 shows the completed hall as a rectangular flat-floored supper room with files of dining tables, an open concert stage backed by a triumphal arch relief and balconies on three sides. This was the work of a minor architect, Samuel Field, but the basic form was adopted by most of the halls built subsequently in the 1850s and 60s (Wiltons, q.v., was in this mould) but much elaborated by experienced pub and theatre architects like Finch Hill & Paraire (e.g. Evans’s new room, 1855, Weston’s, 1857, and the Oxford, 1861).

William Holland took a lease from Morton in December 1867 and under his management the programmes moved toward what was to become standard music hall fare with varied bills, vocal comedy predominating. The resident corps was dispensed with. A proscenium probably appeared at this time. It was certainly present under the management of R E Villiers in the 1870s. His programmes included spectacular ballets d’action, for which a fully machined scenic stage was essential. During his time the hall was virtually rebuilt and major extensions made which gave the hall a main entrance on Westminster Bridge Road, via the arches of a railway viaduct. Villiers had his patent sliding roof installed to effect rapid air changes in the smoky hall. Sliding roofs became a feature of many subsequent variety houses until well into the twentieth century.

The evolution toward theatrical architectural form was completed by Frank Matcham’s remodelling of the auditorium in 1890 with one of his exotic Indian (approximately) interiors, of which disappointingly little record has survived.

The Canterbury suffered the fate of most old music halls in becoming a cinema in the 1920s. It was showing films regularly from 1914 as part of its variety programmes. Under the Hyams brothers from 1921 it continued to feature minor variety interludes (three ‘trial turns’ at each performance) but by the time it was gutted by enemy action in 1942 it was a dedicated cinema. The remains, including an entrance archway next to the original pub inscribed ‘Canterbury Hall 1852’ (referring to the date of the first hall rather than that of the entrance itself) survived until the last traces were cleared away in the mid 1950s.

The Museum of London Archaeological Service dig that took place in 1990 was probably the first ever such investigation of a nineteenth century theatre.

It may be noted that although Morton referred to his great room as ‘the music hall’ the name of the building was Canterbury Hall. It became Canterbury Music Hall much later in its career.