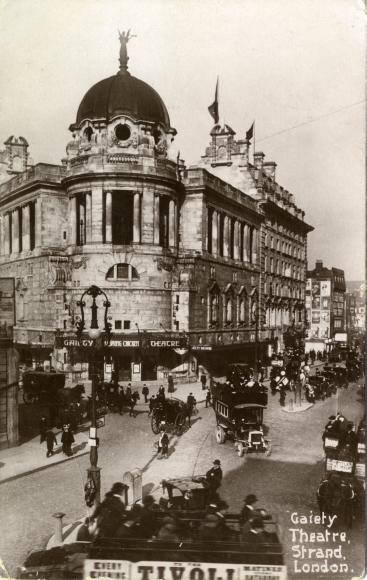 The successor to Gaiety (i) (q.v.) was built on a corner site between the new cut of the Aldwych and the newly widened Strand. It opened in 1903 under George Edwardes’s management, continuing the musical comedy policy of the old house and presenting its established stars, including Gertie Miller, Connie Ediss, Ada Reeve and George Grossmith Junior, ensuring that the new house would be a success from the start.

The new Gaiety enjoyed a sparkling career under a succession of new managements after Edwardes’s death in 1915, experiencing relatively few flat patches, most notably in the 1920s. Its life was brought to a sudden end, as that of its predecessor had been, by a further London County Council road project which never, in the event, advanced beyond planning stage. Acquired by the LCC, together with its near neighbour the Lyceum, it closed in 1939.

It remained dark and stripped of its furnishings after the Second World War and an attempt to acquire and reopen it (by Lupino Lane in 1946) ended in failure. Demolition followed in 1957.

The theatre’s architects, Runtz & Ford, can take little credit for what was, in its time, one of the noblest theatre exteriors in London. The LCC in an attempt (not, unfortunately, pursued with vigour) to establish architectural unity in the new Aldwych, engaged R Norman Shaw as their consultant for this key site and there can be no doubt that the Gaiety of 1903 was, so far as the Portland stone exterior was concerned, essentially his design. The corner was marked by a recessed three stage round tower crowned by a fine attic and dome (the ‘Spirit of Gaiety’ which adorned the dome was rescued from the demolition and can now be seen in the Theatre Museum in Covent Garden). On the two converging three-storey flanks, the top storey was a tall open loggia with an order of coupled Ionic columns carrying an entablature and balustrade, this treatment being continued around the corner tower.

The plan was logical and pleasing, with a circular crush room at the corner entrance. The interior, which was certainly by Runtz & Ford, was quite engaging with three tiers of slightly curved balconies spanning between converging side walls with triplets of boxes at each level, separated at dress circle level by life size kneeling female figures carrying lamps, to the detriment of sightlines already strained in these positions. The stage was ample.

With the passage of time it seems hardly credible that the loss of this fine building could ever have been countenanced, but only one year later, Crewe’s magnificent Stoll (q.v.) was also destroyed.