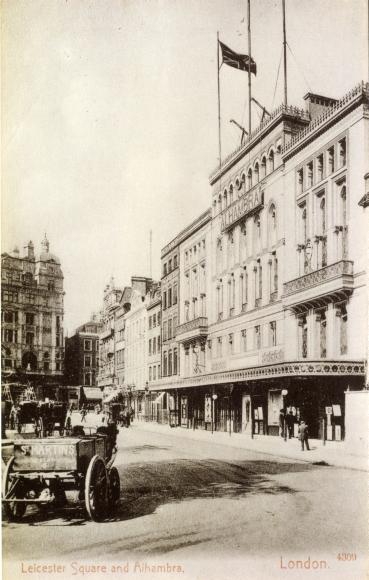 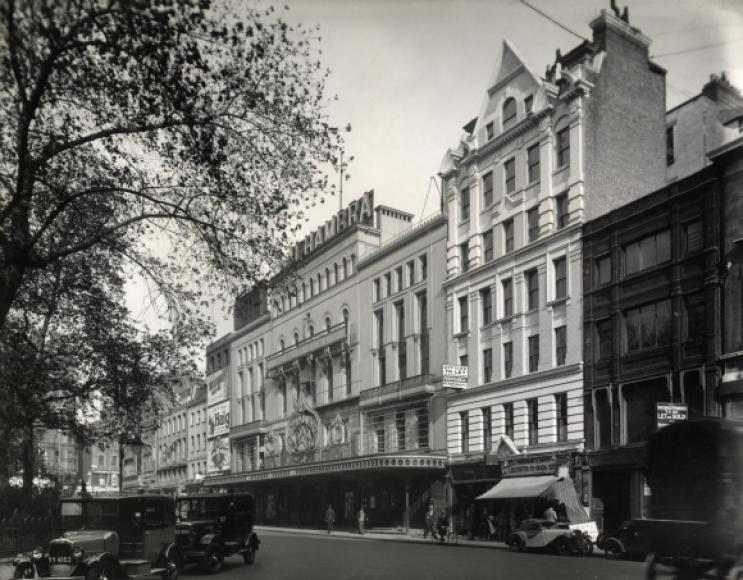 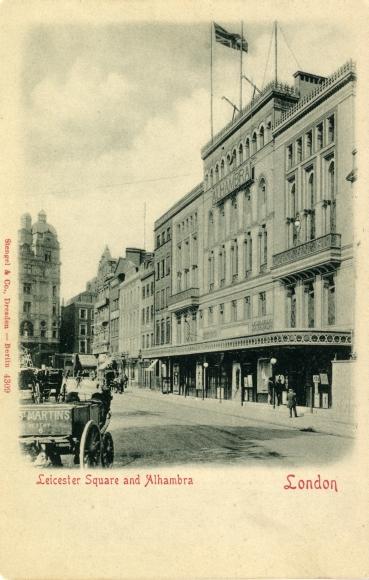 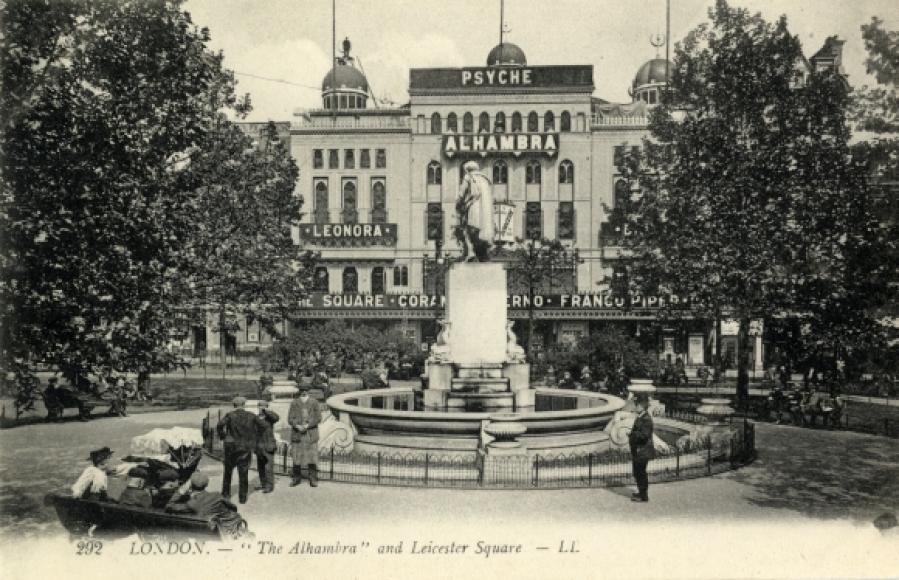 Weston’s (1857), the London Pavilion (1859), the Alhambra (1860) and the Oxford (1861) were the first music halls to enter into direct competition with the legitimate theatres, deliberately aiming to attract the West End audience. Of those named, the Alhambra had the most unusual origin and, in some ways, the most influential career.

The original building was a fantastic Saracenic invention by T Hayter Lewis, opened in 1854 as the Royal Panopticon of Science & Art, an institution for ‘scientific exhibitions and for promoting discoveries in arts and manufactures’. The façade was notable mainly for its twin minarets, flanking a conical roof covering the main interior space, a great domed rotunda with two galleries, an organ and a central fountain. The rotunda was lavishly decorated in polychromatic style.

Within two years this laudable venture faced bankruptcy and the Panopticon was sold to the showman E T Smith. He renamed it the Alhambra Palace and installed a circus ring in 1858. The circus was successful, but Smith obtained a music and dancing licence, added a proscenium stage and reopened as the Alhambra Palace Music Hall in December 1860.

Apart from the proscenium, which was a rare but not unprecedented feature in an early music hall, the Alhambra was run on classic supper room lines with the ground floor filled with tables for food and drink and with the stage presenting a mixed programme of variety and ballet. This was becoming staple fare for the larger halls. The Alhambra was far from being the first music hall to present ballet but it became a leader in this field, supporting a strong company and first rate principals over a period of fifty years. Only the Empire (q.v.), nearby in Leicester Square, could be regarded as a real competitor, and then only after 1884.

From 1864 onward, under Frederick Strange and subsequent managements, the building was improved, galleries added, the proscenium widened and the stage house improved. The entertainment itself achieved a European reputation. The Alhambra (and other pioneer halls) had consciously adopted some of the style of the Parisian caf’conc’ but it became, in its turn, a major influence on the development of the music halls of Paris. It is acknowledged by French music hall historians as the inspiration for the magnificent new Folies Bergere, which opened in 1872. The architectural decorations of the Folies were, significantly Alhambresque.

In 1871 the tables in the auditorium were replaced by rows of seats in order to obtain a stage plays licence. By 1883 this arrangement had become permanent, marking the steady moves that music halls were making toward theatrical form.

A devastating fire in 1882 virtually gutted the building but left the exterior masonry and part of the internal structure standing. The rather less spectacularly decorated reconstruction was again Moorish in character, retaining original columns and arches but bringing the auditorium into a more theatrical appearance with lyre-curved tiers. The stage house was completely rebuilt. In 1897 the theatre was extended at the rear to give it a secondary frontage on Charing Cross Road. In 1912 Frank Matcham made further improvements.

The role of the music halls was vital in nurturing popular ballet, giving employment to ballet artistes and (as importantly) retaining an audience for the ballet after the opera houses had abandoned the form in the mid nineteenth century. This historical phase was brought to an end by the arrival of Russian ballet under Diaghilev in the early years of the twentieth century. The Alhambra was, by this time, a home for revue, but from 1919 to 1922 it presented several Diaghilev seasons before reverting to variety.

The Alhambra closed and was demolished in 1936. The following year it was replaced by the Odeon Leicester Square (q.v.).