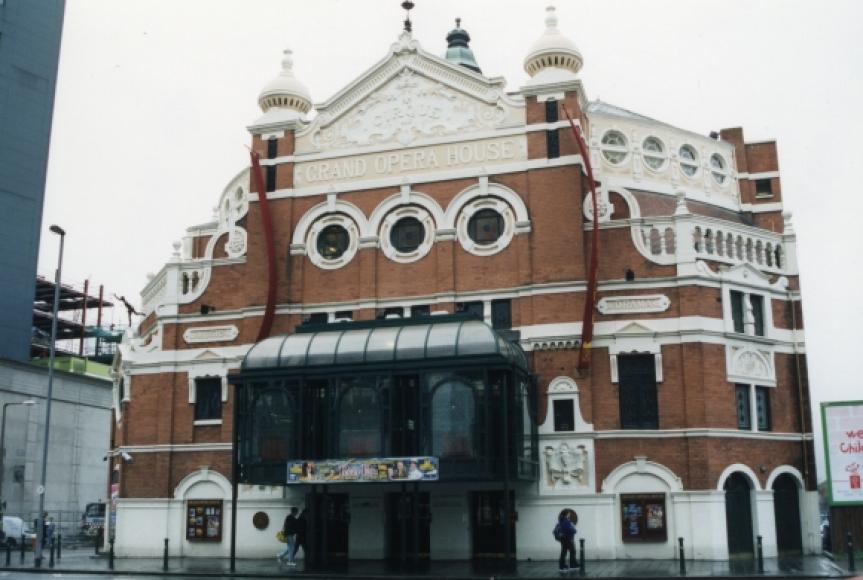 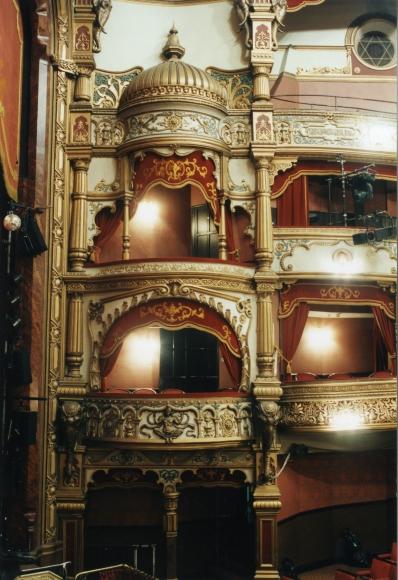 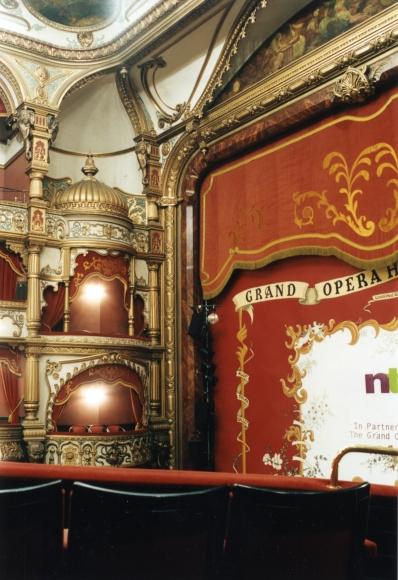 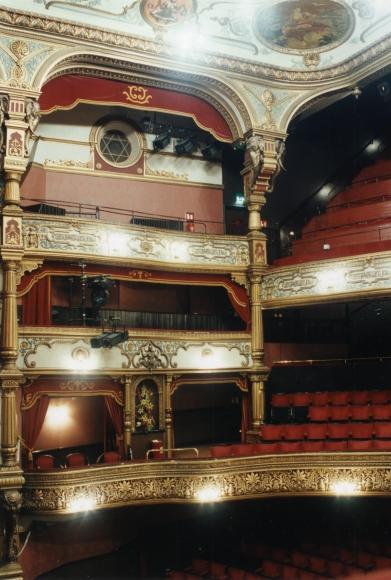 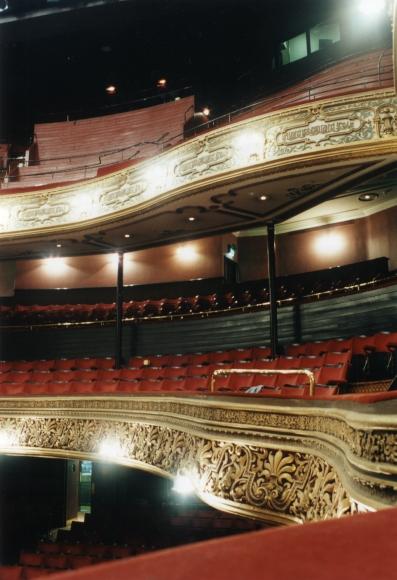 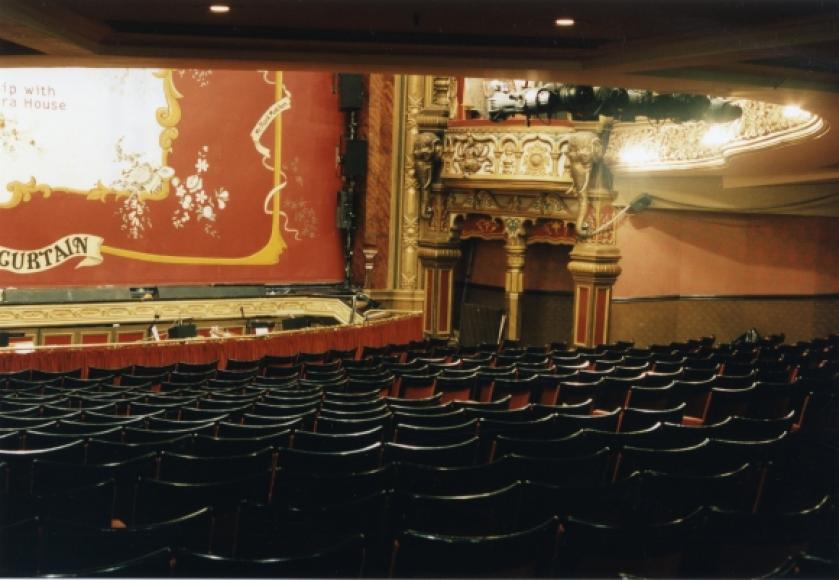 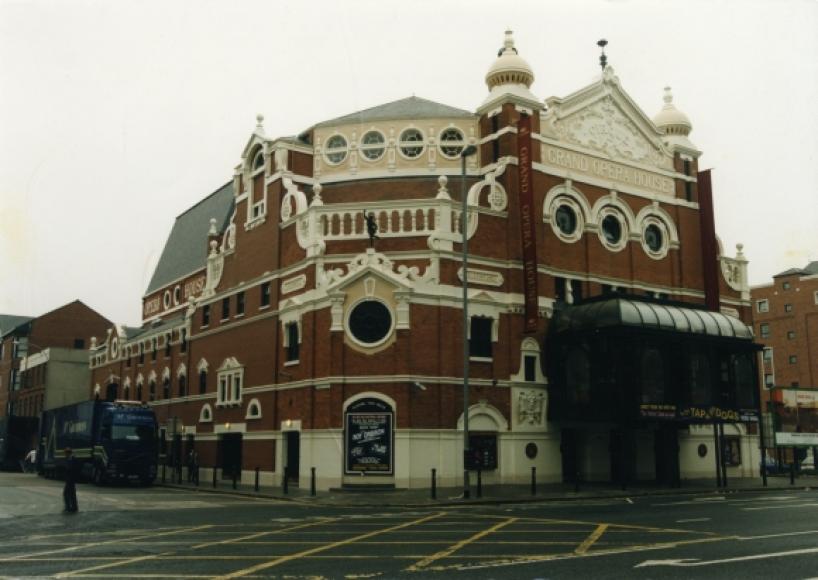 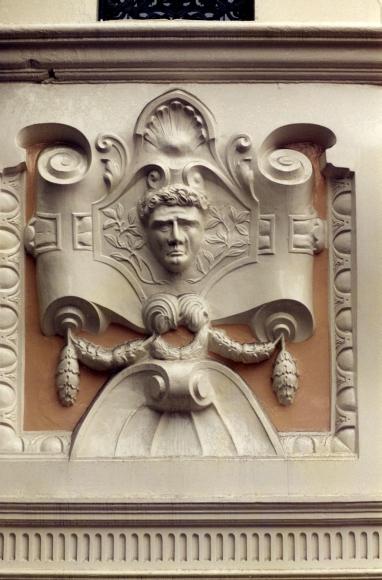 Used as a cinema for many years then closed after bomb damage. Re-opened as a theatre in 1980 after undergoing a splendid scheme of renovation and restoration. The magnificent auditorium is probably the best surviving example in the UK of the Oriental style applied to theatre architecture - largely Indian in character with intricate detail on the sinuously curved fronts of the two balconies and an elaborate composition of superimposed boxes surmounted by turban-domed canopies. The ceiling, which is divided into several richly-framed painted panels that have been exquisitely recreated by artist Cherith McKinstry, is supported on arches above the gallery slips, with large elephant heads at springing level. Proscenium 12m (39ft 8in), stage depth 13.71m (45ft), grid increased to 18.28m (60ft) from 15.84m (52ft). Large, new orchestra pit, the sharp single radius curve of the orchestra rail providing the only slightly jarring note in this superb auditorium.

The exterior, of brick and cast stone, is in a free mixture of Baroque, Flemish and Oriental styles - typical of Matcham’s earlier work. He made good use of the corner site by building up the composition of his design in stages, linked by strapwork scrolls, to the triangular-pedimented central gable which is flanked by domed minarets. The new projecting glass extension to the previously cramped first floor bar is quite in the spirit of Matcham’s architecture (cf Theatre Royal, Portsmouth). In 1982 it was made complete by the addition of the visually important column supports. In 1991 and 1993 the theatre was damaged by terrorist bombs. This necessitated considerable rebuilding of the Glengall Street dressing room block, stage door and get in. Fortunately the auditorium suffered only superficial damage.

In 2006 an extension, a striking addition to the listed Victorian theatre, introduced a range of front-of-house amenities – bars, cafes and function rooms. There were improvements to back-stage areas and a new stage ti encourage the popular large-scale theatrical and musical productions to Belfast.

For the venue's 125th anniversary a restoration and redevelopment project saw the auditorium’s paintings and decorative and ornate plasterwork painstakingly restored and conserved, as well as new seating, carpets, curtains and drapes installed. The design of the foyer and public spaces has been totally reimagined, with a new bar installed in the restored 1980 glass extension overhanging Great Victoria Street, as well as refurbished stalls and circle bars. As part of the project, the theatre’s technical infrastructure has been upgraded and a permanent heritage exhibition installed telling the fascinating story of the theatre’s 125-year history. Facilities for those customers with access needs have also been greatly enhanced throughout.

Now a touring theatre and Ulster’s only venue for major opera and dance companies.